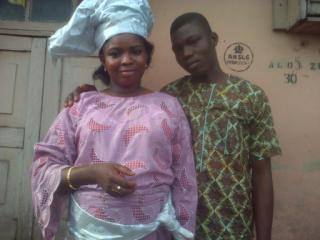 The young man was a gang member.

A non-governmental organisation, Child to Child Network, said it has successfully rehabilitated a 20-year-old ‘area boy’ and re-united him with his family.

The former gang member, Azeez Oderinde, left his parents’ home to join a street gang based in a slum in Lafenwa, Abeokuta.

However, as part of his rehabilitation process, Mr. Oderinde was encouraged by the organisation to go back and complete his apprenticeship as a vulcaniser, a trade he had been learning before joining the street gang.

The young man completed the training successfully and graduated on Friday, October 25.

Mr. Oderinde’s family welcomed their son at their home in Ago-Oko and celebrated his new life.  They were joined in the celebrations by their neighbours and the officials of Child To Child Network led by its Coordinator, Bola Otubusin.

The young-man, speaking to PREMIUM TIMES, thanked the Network for saving him from ‘darkness.’ He promised not to go back to his old ways and added that he was prepared to live a good life and become the pride and joy of his parents – particularly, his mother.

“I must thank God, the network and my mother for coming to my rescue; I have turned over a new leaf. The truth of the matter is that I cannot explain my bad behaviour. God willing, I’m going to face my profession and not go back to the streets,” he said.

Mr. Oderinde also revealed that his mother had bought all the equipment he would need to pursue his trade. He said that he would resume work immediately and noted that his new life may equally change the lives of some of his former friends on the streets.

His mother, Fausat Oderinde, told PREMIUM TIMES that she had once abandoned all hope of her son becoming a changed person.

She said that, at a point, she had taken her picture to the gang’s hideout in Lafenwa, in search of him, but he had evaded her.  She noted that that was when she gave up; until the day the Network brought him home.

“Initially, I was scared and thought he had committed a crime and was brought home by plain clothe policemen until they explained their mission to me. I must thank the Network. My joy as a mother has increased again,” she said.

Ms. Otubusin, speaking on Mr. Oderinde’s rehabilitation, revealed that the network had first taken him to a church for deliverance, after listening to his story. She added that the NGO provided the former gang member with medical care and regular counselling, among others.

She assured that the network would continue to monitor his progress, while making efforts to rehabilitate his former peers.