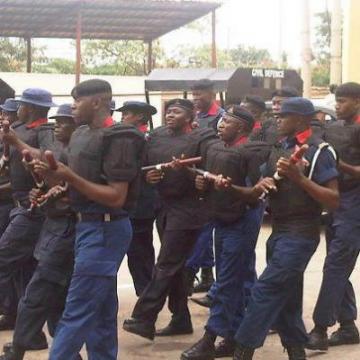 Private guard of banned security firm arrested by in Ogun

The firm was banned for non compliance with NSCDC edicts.

A suspected fake guard working for a proscribed private security firm, Mega Security, has been arrested by the Ogun State Command of the Nigeria Security and Civil Defence Corps, NSCDC.

The arrest of the suspect took place at Korode Private Hospital, Onikolobo, Abeokuta.

The Command’s Public Relations Officer, Kareem Olanrewaju, while speaking to PREMIUM TIMES on Saturday said the 33 year-old suspect was arrested at the hospital dressed in a uniform belonging to the banned security firm.

“This arrest was made based on the directives issued by the commandant (of NSCDC), Aboluwoye Akinwande, that the state must be rid off of fake and unlicensed private security guard companies,” Mr. Olanrewaju said.

He also added that the Private Guard Company, PGC, Department of the Ogun State Command had since the directive began a massive patrol and checks at different locations across the state.

He explained that Mega Security, along with some other PGC had been sealed off for different offences such as operating without government license and not meeting up with the required standards as stipulated by the NSCDC Act 2003 as amended in 2007 which gives the Corps the sole mandate to monitor and regulate the activities of the PGC in the country.

Mr Olarenwaju then advised the public, especially the corporate bodies, to confirm the status of any PGC at the state headquarters before engaging their services to avoid running against the law as both the illegal PGC operators and their employers could be charged to court.