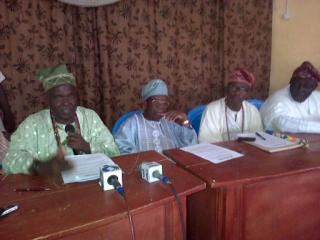 The Igbesa community leader asks corporations and residents of Agbara to respect their “overlords”.

The indigenes and residents of Igbesa Town of Ado-Odo/Ota Local Government Area of Ogun State on Monday kicked against government’s proposed construction of a High Court in the area and naming it after Agbara Estate.

The protesters, who stormed the Iwe-Iroyin Press Centre, Abeokuta, comprised of the town elders and youth, and argued that Igbesa is the headquarters of several communities including Agbara Estate.

Addressing the press after a peaceful protest, Musiliu Akin-Ogun, their leader, lamented that similar injustice was meted out to Igbesaland by a number of companies sited there. He stressed that it was high time corrections are made.

“Who in government service does not know that from time immemorial, Igbesa has been the centre of administration and headquarters of over forty villages and secondary townships including Agbara as well as the current headquarters of Igbesa Administrative Area of Ado-Odo/Ota Local Government Area of the state.

‘Who does not know that the Oba of Igbesaland is the prescribed authority over all the lands in Igbesaland including Agbara. For the information of those who may not know, the purchase agreement for every square metre of land purchased by our revered late Chief Adeyemi Lawson for Agbara Estate Limited was executed by several families in Igbesa because they are all in Igbesaland,” Mr. Akin-Ogun said

“As a matter of fact, Agbara Estate as named by Late Chief Lawson and endorsed by Late Oba Ben Gbeleyi, the then Oba Oloja was supposed to be Agbara Estate, Igbesa. The adjacent Igbesa compulsorily acquired by the Ogun State Government, initially for protective custody, was later passed to Ogun State Property and Investment Corporation, who for their commercial interests wrongly adopted Agbara which was vehemently opposed and fought against at various meetings of April 1988.”

He lamented that, Igbesa is now a victim of official ineptitude, abandonment of official responsibility and conspiracy.

“In the good old days, senior government officials would carry out an extensive study and analysis of issues before advising policy makers to take decision. It is the official that dishes out wrong information misleading the Chief Executive to make decision,” he said.

He further alleged that there are intrigues both in government and among residents on Igbesaland to harness Igbesaland as Agbara, adding, “Our own relation, late Balogun of Agbara, Alhaji Olaleye who tried it, was dealt with by the youths on behalf of Igbesa.”

“That one bought and built on a land does not confer a licence to extend territory. A Briton will not go to France to name it Britain,” he argued

He advised the state government to address the issue, before it transforms into an ethnic clash.

“This may lead to reaction from restive youths. Nothing should be done to promote communal clashes between two families who are long time relations of each other. We should prevent what is happening in the Niger-Delta, Ife/Modakeke and some parts of the North from happening in Ogun State.

“We want to advise Agbara Estate Limited and OPIC Management to properly recognise their overlords, to know that they are located in Igbesa and to address themselves and advise their tenants. We call on establishments on Igbesaland to recognise their overlords, and to see Igbesa as your location. It is part of your corporate social responsibility to be just to your host community not just in monetary terms alone. It is for your security and to make your business thrive.”