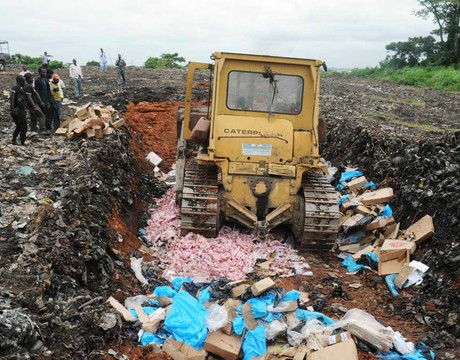 The smugglers are said to have escaped arrest.

The Oyo/Osun command of the Nigerian Customs Service, NCS, said it has destroyed a load of frozen turkey worth N11.5 million.

The consignment was intercepted by men of the security outfit along the Ibadan – Ife expressway following a tip off from a member of the public,” the service said at the weekend.

A statement said the contraband was contained in a Toyota bus at the time of interception, and were concealed in 2,500 cartons of assorted household goods including soaps, milk, synthetic human hair, insecticides and beverages.

Customs spokesperson, Nkiruka Nwala, said the smugglers managed to escape and abandoned the goods when they sighted Customs officials at a checkpoint along Ibadan – Ile Ife expressway on May 8.

The release said the smugglers were suspected to be taking the intercepted contraband to Ado-Ekiti area.

The command said it destroys such consignments after seizure because their consumption is dangerous to human health.