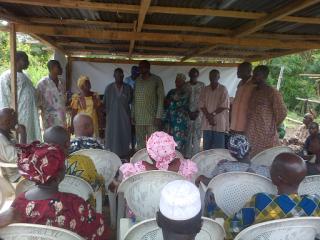 The election was held on Saturday.

The Olokuta Community Development Association, CDA, located in Idi-Aba area of Abeokuta South Local Government of Ogun State has elected new executives to run the affairs of the community for a two-year tenure.

The election held on Saturday was conducted by officials of Ministry of Community Development and Cooperatives, under the supervision of Oluwasegun Soyele, zonal officer of the Ministry.

Speaking at the election venue, Mr. Soyole tasked the community officials to adhere strictly to the rules and regulations guiding the CDA.

He warned the officials to avoid unconstitutional activities as such may not be to their interest or that of the community they were elected to serve. He stressed that anybody found wanting will be prosecuted accordingly.

Mr. Soyele emphasised the need for regular monthly meetings by the community and the importance to liaise regularly with the supervising ministry.

Speaking after the peaceful election, the Chairman, Wale Ogunsan on behalf of other newly elected officers assured that the team will contribute meaningfully to the growth of the community. He sought for cooperation of the residents, pointing out that the task ahead should be seen and regarded as everybody’s affairs, just as he requested for adequate and regular support from the immediate past executive.

“On behalf of all newly elected executive, I want to assure the community of our commitment and dedication towards the progress of all. We are not going to disappoint you, because for electing us, you must have seen some qualities in us,” he stated.

“We are equally using this opportunity to call on the immediate past executive and other stakeholders in the community that we shall need your support, we can’t do it alone, but with you all, we shall have breakthrough,” the chairman added.