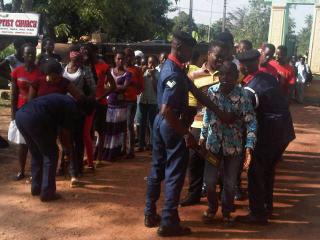 The students were arrested by Civil Defence officers.

At least 82 candidates who sat for Saturday’s examination by the Joint Matriculation Examination Board(JAMB) were arrested for alleged examination malpractices in Ogun State.

The students were arrested by the Ogun State Command of Nigeria Security and Civil Defence Corps.

The Command’s Public Relations Officer, Olanrewaju Kareem, who confirmed the arrest to PREMIUM TIMES in Abeokuta, said the candidates were arrested from different centres across the state.

He explained that they were caught cheating during the examination. While some were caught using their phones others were in possession of prohibited materials such as books,palm top, scientific calculator among others.

The Ogun Commandant of the Civil Defence, Aboluwoye Akinwande, said appropriate action will be taken against the suspects.

”The first thing is that they have been made to fill relevant form. Investigation will be conducted,that will determine their culpability and then we can decide on trial. Necessary information about them have been collected,” he said.

“The arrest were mainly from Ogun Central followed by Ogun East and West with very wide marging. Apart from the arrest no violence recorded so far as all 108 examination centres were properly policed both plain and uniform men.

“The Corps will continue to do its best at all time to ensure examination malpractices is reduced to the barest minimum if not eradicated. We will continue to appreciate the support of candidates, parents and other stakeholders,” Mr. Akinwande added.