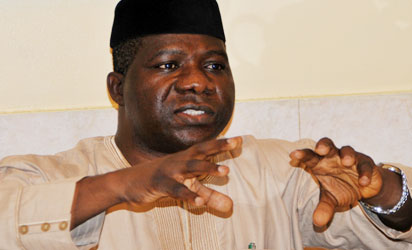 The lawmaker representing Ado Ekiti/ Irepodun-Ifelodun Federal Constituency of Ekiti State at the House of Representatives has stated that he would not attend the funeral ceremony of the state’s deputy governor after alleged attacks on his convoy two weeks ago.

Opeyemi Bamidele was allegedly attacked by unknown youth at Igede Ekiti on April 13, smashing the windscreen of his Toyota Prado and shooting after his Landcrusier jeep.

In a statement, Monday, Mr. Bamidele named Tajudeen Awe and Deji Adesokan, Caretaker Committee Chairman of Irepodun-Ifelodun local council and Special Assistant to the Governor on Internal Security respectively, as the masterminds of the attempt on his life.

The lawmaker also said that the duo had been going round “in the last two days” threatening to further attack him at the funeral programme of Funmi Olayinka, the late Deputy Governor.

“Again, much as I would like to disregard this as a silly talk, I have considered the implications of any such attempt and the vehemence with which Ekiti people who sympathise with my cause would, most expectedly, react. I am also convinced that the law enforcement agents will sufficiently resist these hatchet men and their cohorts,” said Mr. Bamidele, House Chairman on Legislative Budget and Research.

“But to allow any chance of a slightest disruption or undue politicization at a time we are all supposed to be paying our last respect to this departed soul would amount to monumental disservice to her family, the ACN and well meaning Ekiti people who are genuinely mourning her death.

“I have, therefore, chosen to excuse those who would prefer that their perceived opponents do not share the space with them and continue to identify with the immediate and extended families of the deceased in my own way as led by God who knows and sees all of us within and out,” Mr. Bamidele added.

Days after the attack, Mr. Bamidele claimed that he was attacked by people who felt threatened by his “rising profile” in the state.

However, the state chapter of his party, the Action Congress of Nigeria, ACN, quickly issued a statement distancing its members from the alleged attack.

In his statement, Mr. Bamidele, a former Commissioner for Information and Strategy in Lagos State, berated Mr. Awe for accusing him of mismanaging N187 million constituency project funds.

“I simply could have dismissed Tajudeen Awe’s tantrums as not deserving of my time and attention in responding. Moreso, when I would have expected that anyone who could be saddled with the responsibility of managing the affairs of a Local Government would, at least, have some basic understanding of the workings of Government,” Mr. Bamidele said.

“But in the event that this is genuine ignorance on the part of Tajudeen Awe, I will like to state for the record that I, like other elected legislators, was not given any money in respect of constituency projects and so could not have mismanaged a ‘released sum of N187Million,” as maliciously alleged by Tajudeen Awe.”

Mr. Bamidele also accused the council boss of being behind the flooding of the state capital with Labour Party posters, last December, bearing his pictures and announcing his gubernatorial ambition for 2014.