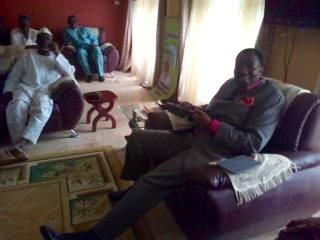 The meeting is being held in Abeokuta, the Ogun State capital.

A former Ogun State Governor, Gbenga Daniel, is currently in a close door meeting with Alani Bankole, a political leader in the state and father of former Speaker of the House of Representatives, Dimeji Bankole.

The meeting, going on in Mr. Bankole’s home in Abeokuta, is said to be part of Mr. Daniel’s moves to reconcile with some of his known political enemies.

Just this weekend, the former Ogun governor had a sort of re-union with his predecessor in office, Segun Osoba, at Ikenne during burial of Oluwole Awolowo. The two ex-governors were sworn enemies during Mr. Daniel’s eight year tenure as governor.

Nigeria Central Bank to phase out polymer notes from June