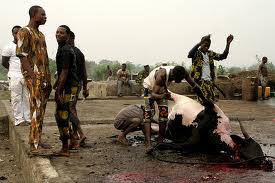 Lagos plans to increase food supply by 25 per cent

The Lagos government said it will maximize its advantages in agriculture.

The Lagos State Commissioner for Agriculture and Cooperatives, Gbolahan Lawal, said on Friday that the state government would increase food supply to its over 20 million population by 25 per cent.

Mr. Lawal said this on Friday while addressing a Ministerial news briefing to mark the sixth-year anniversary of Governor Babatunde Fashola in Office.

He said that government would continue to give food security and empowerment generation top priority. It is not clear if the state’s actions will lead to a reduction in food prices.

The commissioner said that despite the state’s high industrial status and pressure on lands for non-agricultural purposes, government has identified productive activities.

“Government had identified farming activities in the areas where it has comparative ecological and socioeconomic advantages.

“Such areas include fisheries, livestock and vegetable production, as well as agro-allied food processing, with emphasis on value addition,” he said.

He said that the rehabilitation of coconut belt for tourism and poverty alleviation, and the commercial agriculture development project are set to increase food production in the state.

The commissioner said that the ministry had recorded huge progress in the last one year through various food production programmes.

“Some of these programmes are the Strategic Food Reserve, beginning with a modern high quality cassava factory at Araga in Epe, and the expansion of rice for job initiative with 400 youth.

“Establishment of infrastructure facilities at Songhai, Abia, Badagry under the Agricultural Youth Empowerment Scheme and the establishment of the Cooperative College at Oko-Oba,” he said.

Mr. Lawal said that the ministry had also embarked on a series of programmes, including the National Fadama Development Project, Input Subsidy and Organic Farming promotion to increase farmer’s income.

“We try to reduce drudgery in agriculture by providing mechanisation, and also Agricultural Land Holdings and Management to give farmers land,” he said.

He said that with the support of residents, the state government’s undaunted commitment towards the attainment of food security would be achieved.

The commissioner disclosed that the state government would also organise a clean-up and redevelopment of the dilapidated Oko-Oba abattoir.