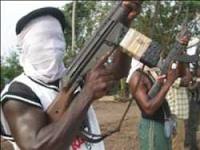 The former scribe was not at home when the armed men arrived.

Mr. Adigun, who was away to Ekiti State to open a new office for his party when the incident happened, said he was the target, wondering why people could be after his life.

“I don’t have deals. I owe no one and no one owed me any money. I hardly have enemies, but, I know I criticize government a lot.

“This is a dangerous trend, that we are having this kind of thing again in this state. Apparently they were after me, because we learnt they came about 9.00 p.m. and 10.00 p.m., when they calculated I would have dispersed my visitors and would be relaxing. They calculated the time,” he said in a telephone interview on Wednesday.

The corpse of the night guard, identified simply as Pa Olapade, an ex-service man, was discovered Wednesday morning by the day guard, Wasiu Adeniran, when he came to resume his duty shift at the Akobo, GRA residence of Mr. Adigun in Ibadan.

Mr. Adeniran said the deceased was met blindfolded, gagged and clobbered to death.

He said he was surprised when he arrived the house at about 6.58 a.m. and knocked on the gate only to get no response for almost 30 minutes.

“We normally resume shifts at 7.00am and 7.00pm. So when I came and knocked hard there was no answer. There was no sign of his footsteps, or radio set, which he normally left on. I stayed for about 30 minutes outside, when Usman, a neigbour’s security guard next to us advised I should knock again because it was unusual of Baba not to come out by that time. It was then I used my hands to pry open the gate from behind. As I entered it was Baba’s dead body that I saw lying at his post near the entrance. He was tied. I quickly raised alarm and called Oga’s secretary and his Special Assistant,” the guard said.

The former state government scribe, who said he was informed through a phone call Wednesday explained that nothing was stolen from the house, adding that the main building was not even broken into.

“I have no clue why anyone would make attempt on my life, but I suspect political undertone,” he said, adding that he would henceforth seek police protection.

The corpse had been deposited at the Adeoyo Maternity and State Hospital, Yemetu, while the matter was reported at the Akobo Police Station.

Sympathizers including relations, workers, colleagues and political associates of the politician besieged the house to commiserate with him.