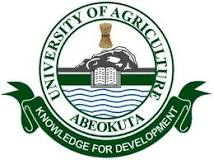 The students had just alighted from a school bus when an SUV ran them over.

Two students of the Federal University of Agriculture, FUNNAB, Abeokuta, were on Friday evening crushed to death by an over speeding driver.

Witnesses say the driver of a golden colour Pathfinder SUV, rammed into the 100 level male students at Isolu, a-two kilometer distance from the permanent site of the University in Alabata, Abeokuta.

The young men died on the spot.

The driver took to his heels immediately after the crash. The deceased students’ colleagues gave him a hot chase, but could not catch up with him.

They, however, went on a rampage, setting the car ablaze and barricading the road that leads to their campus and even ignoring policemen who attempted to assuage the riot.

The University’s Public Relations Officer, Kola Adepoju, confirmed the incident to journalists. He said the school had declared Monday a “mourning and lecture free day”.

“We lost two of our students. They were hit by a reckless driver who was over speeding. As he was avoiding a headlong collision with an oncoming vehicle, he rammed into two of the students that just alighted from the school bus,” Mr. Adepoju said.

“There has been a protest over the incident … Monday has been declared a mourning and lecture free day. We have got in touch with the families of the deceased,” the university spokesperson told journalists.