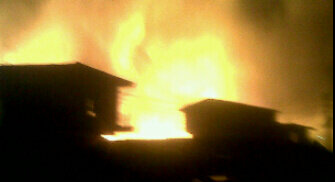 UPDATE 2 (12:17): Resident Adekoya Boladale said, “The situation here is very sorrowful. The fire seems to be going down compared to hours ago but still burning heavily. Goods worth 100 of millions have been destroyed. Properties are still burning and we are fighting hard to put out the fire with the fire team. Kindly permit me get back to join others in evacuation.”

UPDATE: Simon Ateba, a journalist with Lagos-based PM NEWS is reporting that the fire is now being put out. He said the plank market was razed, some buildings burnt but that there’s no report of death.

Mr. Ateba, who lives in Ketu, said, “Fire now being put out. Market razed. Buildings burnt. No confirmed report of death yet at police station. Only millions of naira gone. Some families now homeless.

“As fire is put out we will have a clear idea of what was lost. Who was affected. Fire on for 2 hours now and I’m exhausted. It’s almost midnight here. Need a shower and some sleep.”

Read our earlier report below.

A report that has just reached us says a plank market in the largely populated town of Ketu, a suburb of Lagos, is on fire.

A resident of the town, Adekoya Boladale, said in an update on his twitter handle  (@Adekoyabee) that the fire started around 9 p.m. from the wood(pako) market in the town, spreading fast to other parts of the community

Mr. Adekoya provided a link to a blog covering the incident.

The blog reported that the fire had “engulfed the community area and presently spreading across to the main road burning houses and shops.”

The cause of the fire could not be ascertained yet, the report said.

Mr. Boladale later updated his twitter handle saying emergency workers were yet to flood the area.

“Ketu is on fire.Houses are burning and just one fire van is here. Emergency team needed,” he said, in what appears a distress call.

Another resident, Simon Ateba said on his Facebook page, “Iso Pako (Plank Market) on Demurin Street, Ketu, a Suburb of Lagos, Nigeria is on fire and threatening. Fire Service attention is needed asap.” Mr. Ateba is a journalist with Lagos-based PM NEWS.

We will provide more details as we get more information.

A Mama in the Villa, By Nasiru Suwaid

Nigeria, My Beloved: An 18-Year-Old Writes Her Activist Father, By Torera Fagbenle