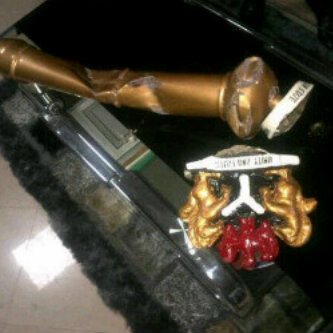 The lawmakers destroyed the mace of the assembly during the fracas.

The Speaker of the Ogun State House of Assembly, Suraji Adekanbi, was on Tuesday suspended by 14 lawmakers in a rowdy session at the Assembly Complex in Abeokuta, the state capital.

The 14 lawmakers also suspended four other principal officers of the Assembly.

However, another set of 12 lawmakers including the speaker, announced the suspension of fourof the opposition lawmakers.

The mace of the parliament was damaged in the ensuing crisis.

The latest crisis in the assembly is linked to the composition of a Tenders Board by the Assembly with lawmakers accusing the speaker of imposing his cronies in the committee.

The Ogun Assembly has been polarized into two factions since inception with a group of 14 allegedly loyal to the former governor, Olusegun Osoba; while the other 12, including the speaker, are loyalists of the state governor, Ibikunle Amosun.

Both Messrs Osoba and Amosun are leaders of the Action Congress of Nigeria, ACN, in the state.

The Amosun camp led by the speaker earlier in the day attempted to suspend four members of the opposition including Adijat Adeleye-Oladapo, Remmy Hazzan, Obafemi John, and Job Akintan.

The majority members rejected the suspension and the mace of the assembly was damaged in the ensuing melee.

The majority members reconvened in the Assembly Complex and chose one of them, Remmy Hazzan, as temporary speaker.

A five minutes session was held. Oludaisi Elemide, representing Odeda constituency, moved a motion for the suspension of the speaker; his deputy, Tola Banjo; and two other principal officers.

The motion for suspension was seconded by Samson Demuren representing Ijebu North-East.

The members present all supported the motion. After the suspension, Mr. Hassan adjourned sitting until further notice.

He spoke with journalists after the sitting, stating that the suspension of the speaker and others was as a result of ‘mal-administration’ by the leadership.

He made allegations of fraud in contract award and said the 14 lawmakers would not fold their arms to see the state’s funds being mismanaged.

Mr. Hazzan, accompanied by his colleagues, told journalists that more revelations of financial scandals would be made public in due course.

However, at about 3.00 p.m., the speaker’s camp made an attempt to reconvene. The attempt was scuttled by the fourteen members.

The state governor, Mr. Amosun on hearing the news, hurriedly left the 76th birthday celebration of former President, Olusegun Obasanjo, to intervene in the crisis.