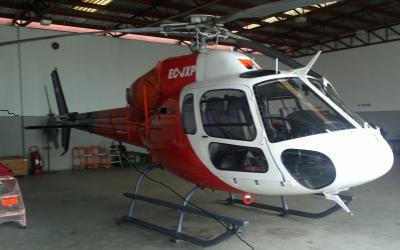 OAS took delivery of the helicopter in January

As part of its determination to make Osun inhospitable to criminals, the state government has acquired a helicopter to beef up its Swift Anti-Robbery Squad (SAS) in the aspect of aerial surveillance.

The helicopter, a French Five-Plus-One passenger Eurocopter AS-355N, is a 2006 Model with twin engines.

A statement by the Director, Bureau of Communications and Strategy in the Office of the Governor, Semiu Okanlawon, explained that the latest security acquisition, under a Lease agreement with OAS Helicopters, Lagos, compliments the state’s investments on adequate protection of lives and properties of the citizenry.

Last year August, the state government launched the Swift Action Squad outfit with five Armoured Personnel Carriers (APC) and 25 patrol vans. It has since acquired another set of 100 patrol vans to ensure that all nooks and crannies of the state are covered.

The helicopter is also to provide emergency services for the Osun Emergency Management Agency and the O-Ambulance in cases of medical emergencies and other forms of evacuations.

At the launch of the SAS in August last year, the Governor, Rauf Aregbesola, promised that the government was working hard to ensure aerial surveillance which would make it impossible criminals to escape out of the state the moment any crime is committed.

The Governor had explained then that once the state is well-secured from the activities of bandits, the state would become attractive to investors, thereby catalyzing rapid growth of the economy.