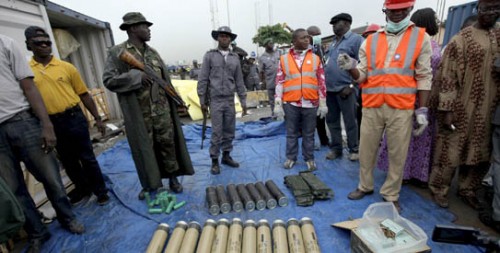 The men disguised as custom officials and laid ambush at the Abeokuta-Ibadan road.

The men were dressed in fake Nigeria Customs Service, NCS, uniform and laid ambush to rob motorists along Abeokuta-Ibadan road.

The bandits had laid siege at a strategic position between Olodo and Kila Villages in Odeda Local Government Area of Ogun State around 3:00 p.m., pretending to be personnel of the Customs Service on duty.

But the police received intelligence and moved quickly to botch the activities of the robbers.

He said the robbers wanted to use the advantage of Customs’ hitherto check point along the axis to rob unsuspecting motorists.

Mr. Adejobi said the robbers ran away once they heard the police was coming, but the combined efforts of officers of the Quick Respond Service, QRS, and other police officers made it difficult for the robbers to escape.

The police PRO warned unsuspecting members of the public to be wary of fake check points, saying there is no longer a check point for personnel of Nigeria Customs at the Abeokuta-Ibadan road.