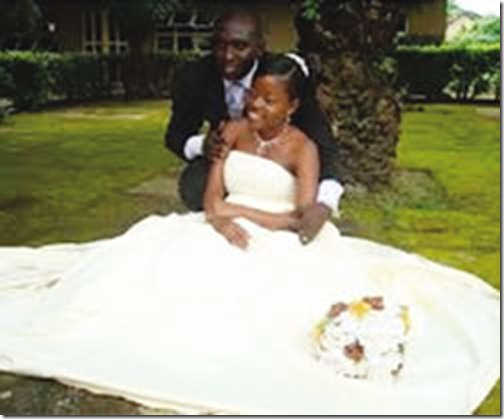 Akolade Arowolo allegedly murdered his wife at their residence in Isolo, Lagos.

A Lagos High Court judge, Lateefat Okunnu, Tuesday, fixed January 22, 2013, for continuation of trial of the banker allegedly murdered by her husband after the defence witness failed to turn up.

Autopsy report of the deceased revealed that she received more than 76 stab wounds as she bled to death.

The defence opened their case with Mr. Arowolo’s father who testified on November 29.

But on Tuesday, the defence’s second witness failed to appear in court.

“As at yesterday (Monday) when I met with her, she was down with malaria fever and can’t stand the rigours of coming to court,” Olanrewaju Ajanaku, the defence lawyer, told the judge.

“She was within the court premises during the last sitting. I was in even in a dilemma on bringing other witnesses to court but the problem was that I didn’t prepare them for today,” he added.

The prosecution, who called 16 witnesses, closed their case two weeks ago.

Lead prosecution lawyer, M.M. Balogun, requested for a cost to be awarded to them after Mr. Ajanaku asked for an adjournment.

Ms. Okunnu, while frowning at the defence’s failure to produce other witnesses, turned down the request.

“Don’t delay this trial; when one witness is not available, then the other ones should be present in court,” said the trial judge.

Mr. Arowolo was first arraigned before Ms. Okunnu on December 21, 2011, for one-count of murder.

Last Thursday, the suspect’s father, Mudashiru, blamed the deceased’s stepmother, Adetoun Oyakhire, for the enmity between the couple who got wedded in 2008.

While absolving his son of guilt in the murder, Mudashiru added that the deceased had aborted his son’s child on the instruction of the stepmother.

However, during cross examination, Mudashiru stated that a statement he wrote at the State Criminal Investigation Department, Panti, that he didn’t know why his son killed his wife was made under duress.

“The Investigating Police Officer asked me to write it like that,” said the suspect’s father.