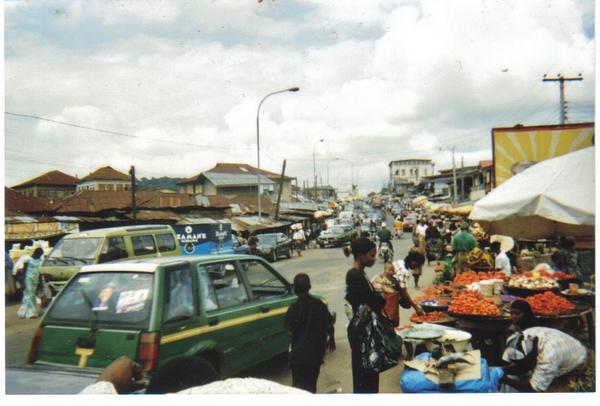 The Ogun government wants to demolish the Itoku Market.

Traders at the famous Itoku Market in Abeokuta, the Ogun State capital, on Wednesday protested against the state government’s deadline for them to quit the market. The government has said the market is to be demolished to pave way for the proposed road dualisation of the area.

The aggrieved traders, during the protest, said the planned demolition of the over 100-year-old market would ruin their businesses and means of livelihood. The traders who temporarily barricaded the roads leading to the market urged Governor Ibikunle Amosun to give them more time to vacate the market and to also provide them alternative space.

The governor had on Monday personally visited the market to appeal to the traders to vacate the area by Wednesday in order not to be caught unawares by the emergence of bulldozers of the state government.

The traders appealed for an extension of the deadline to January, next year, to enable them sell off the new stock of wares which they had just got in anticipation of the usually high patronage during the Christmas and New Year seasons.

Speaking on the development, the Chairman of the Clothe Section in Itoku Market, Sulaimon Fadipe, emphasised that the business interest and fortunes of many of the traders at the market would be put in serious jeopardy if the governor insisted on the ultimatum he gave them to vacate the market.

The market leader said that many of the traders had just spent hundreds of millions of Naira to purchase new stocks. He said they did not expect such a short ultimatum from the governor at this time of the year.

Mr. Fadipe appealed to the governor not to expel them from the area but to consider providing an alternative space for them within the vicinity.

“The governor came here three days ago to inform us that we should be getting ready to vacate the market to pave way for its demolition for the proposed reconstruction of the road. We are happy about the development. We approve of it because he wants to develop our town.

“But our appeal to the governor is that he should for God’s sake give us till January next year to enable us sell our wares for the forthcoming Christmas and New Year celebrations,” he said.

The leader of women traders (Iyaloja) of Itoku Market, Funmilola Ayorinde, claimed that due to the shocking news of the planned demolition of the market, many of the traders at the market had since Monday come down with various ailments and some had actually been hospitalized.

She said that the traders are not opposed to the planned demolition of the market but would appreciate an extension of the deadline given them to quit the area.

“We thank our governor for having the interest in developing the state but our appeal to him is that he should please give us more time. We have just got new stocks for the Christmas and New Year celebrations.

“So, he should please allow us to sell our new stocks during this period so that what would be left with little wares for us to pack when vacating the market for the demolition exercise to commence,” Ms. Ayorinde said.