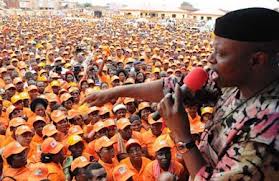 The Inspector-General of Police, Mohammed Abubakar, has deployed a new Commissioner of Police to Ondo State to take charge of security matters for Saturday’s governorship election.

The police spokesperson said Mr. Ndabawa held a meeting with some top police officers, apparently on election matters, with a view to achieving success in his new assignment. The new police chief who was posted from Rivers State was expected to stand in for the state’s Commissioner of Police, Danladi Mshelbwala, for the period of the election.

Mr. Aremu said that the command was fully prepared for the election. He urged the electorate not to entertain fears and come out to cast their votes. He stressed that adequate security measures had been made to ensure the protection of lives and property during the polls.

Some political parties had called for the replacement of the INEC Resident Electoral Commissioner and the Commissioner of Police as part of measures to ensure a free and fair election. They accused both officials of partisanship for the election.