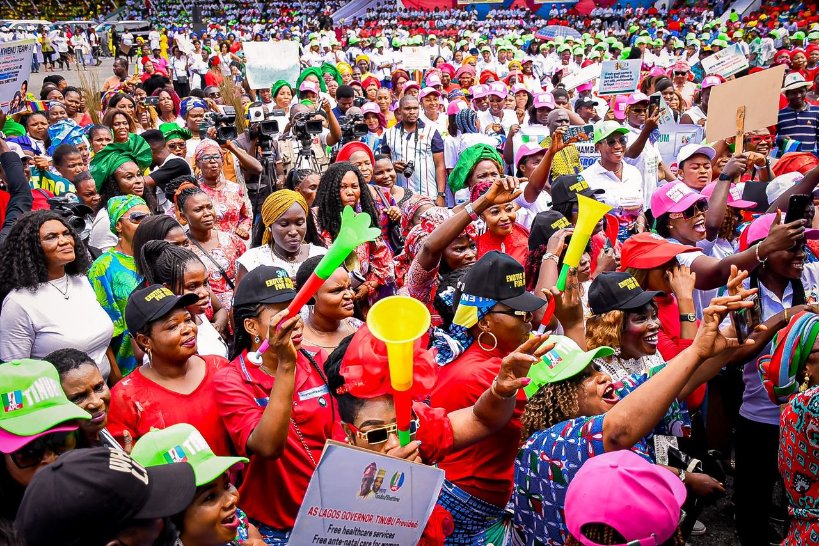 The women, who converged on Hero Square, later marched through the Imo International Conference Center (IICC) to the Government House, Owerri.

Thousands of women from the South-east zone Wednesday converged on Owerri for a rally in support of APC presidential candidate, Bola Tinubu, and his running mate, Kashim Shettima.

The women, who converged on Hero Square, later marched through the Imo International Conference Center (IICC) to the Government House, Owerri, where Governor Hope Uzodimma of Imo received them.

Addressing the women, the governor said APC had done well and was a party to beat in the zone.

“In the South-east, APC is strong; we are in every nook and cranny of the zone and we are solidly behind our presidential and vice presidential candidates and all APC candidates in the zone,” he said.

Mr Uzodimma commended the women for their commitment, resilience and patriotism in turning out en mass to show solidarity for the party and its candidates.

He expressed happiness that after many years of the civil war, the second Niger Bridge had been completed and most of the federal roads have received a facelift.

“We are indeed happy with President Muhammadu Buhari.

He expressed confidence that Mr Tinubu would replicate the development he initiated in Lagos in Nigeria if voted into power.

“In 1999, when there was no story of women’s inclusion and when the Chinese Beijing Conference has not taken resolution, he chose a woman as his running mate in Lagos.

“So, this is a man after the heart of women,” he added.

“It is on record that the ruling APC in Nigeria of today has given women a lot of opportunities in politics and corporate governance more than any other.

“In Imo State today, our performing governor has done a lot more to improve the standard of life by accommodating women in positions of leadership and governance,” she said.

According to her, our ideal 21st-century leader must have the ability to make the most out of every situation.

She said such leaders must be courageous and push the boundaries to make things better.

“The best leaders know how to get the most out of people; they enable the full potential in others.

“These are the qualities we have found in Bola Tinubu right from when he joined politics and throughout the MKO Abiola’s struggle of 1993, the struggle and bustle for democracy and his eventual reign as the governor of Lagos State from 1999 to 2007,” she said.

The governor’s wife described Mr Tinubu as a “core democrat, a Pan Nigerian who gave different tribes a shot in his administration.”

Also speaking, the national women leader of the party, Bertha Edu, assured the party faithful that APC would usher in peace and development to the South-east.

“We came with an agenda for the South-east, that agenda is APC.

“As a people, we will continue to vote for APC,” she said.