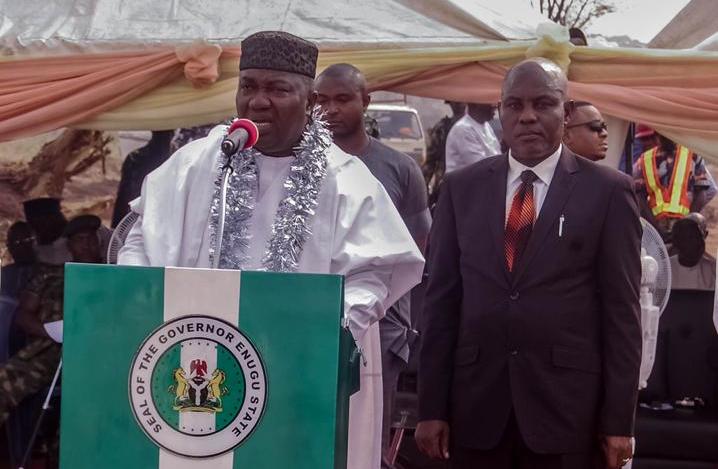 The governor disclosed this when the people of Mgbowo Community in Awgu Local Government Area of the state visited him at the Government House, Enugu.

Governor Ifeanyi Ugwuanyi of Enugu State on Thursday said his utmost desire was for all communities in the state to continue to live in peace and harmony for steady progress and development of the state.

Mr Ugwuanyi stressed that the biggest gift he needed from the people of Enugu State was continuous peace.

The governor disclosed this when the people of Mgbowo Community in Awgu Local Government Area of the state visited him at the Government House, Enugu, to “appreciate his good works and peaceful disposition”.

The community also appreciated his “considerable concern for their well-being and concerted efforts in addressing myriads of their socio-economic challenges”.

The residents of Mgbowo, led by the Commissioner for Science and Technology in the state, Obi Kama, were also at the Government House to declare their support for the Peoples Democratic Party (PDP) leadership in the state.

They pledged to support the governorship candidate of the PDP in the 2023 general elections, Peter Mbah, and others fielded by the party.

Thanking them for their solidarity and support for his administration, the PDP governorship candidate and other candidates of the party, Governor Ugwuanyi, who is the senatorial candidate of the PDP for the Enugu North District, urged them to “hold on tightly to their belief in the PDP”.

He assured them that Mr Mbah and his running mate, Ifeanyi Ossai, would build on the foundation his administration had laid, “anchored on peace and good governance”.

READ ALSO: Why over 50 Enugu communities don’t have electricity – Official

Earlier, the President General of Ekpulambo Mgbowo, Collins Okelu, told Mr Ugwuanyi that “Mgbowo Ward has benefited so much from your purposeful and people-oriented leadership in the state in so many areas”.

Mr Okelu listed some of the governor’s achievements in Mgbowo Ward to include “the construction of ultramodern classroom blocks at Community Primary School Ezioha Mgbowo, upgrading of Technical and Vocational College, Imama Mgbowo to one of the best in the state”.

Others, Mr Okelu said, were the creation of access road from Old Road, Amaiyi Mgbowo to Enugu-Port Harcourt Expressway, construction of three solid block culverts linking the three villages of Ekpulator Mgbowo, Inyi, Ezioha and Imama, and laying of asphalt on the Amata Mgbowo Road

Appreciating Governor Ugwuanyi for appointing their sons and daughters into sensitive government positions, the president general said: “Mgbowo people owe you a huge debt of gratitude and be rest assured that this debt will be paid with our block votes in next year’s general elections for PDP.

“We have neither gold nor silver to give you in return for your continuous magnanimity to our people, therefore, our visit to you today is to pledge our unalloyed support to you and our candidates.”