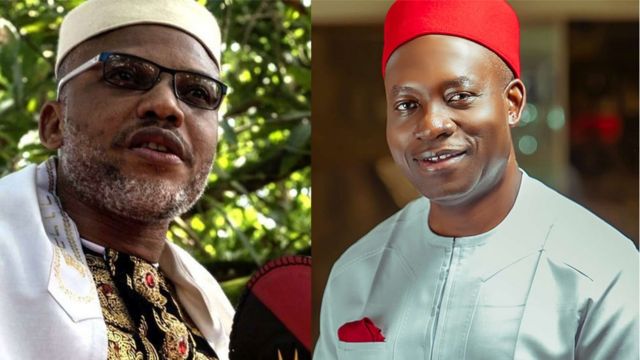 Mr Soludo said the visit to Nnamdi Kanu was part of his 'wider consultations' with critical stakeholders to ensure lasting peace and security in the South-east.

Nnamdi Kanu, the leader of the outlawed Indigenous People of Biafra (IPOB), has expressed sadness over the spate of killings and other forms of criminalities in the South-east, Governor Charles Soludo of Anambra State said on Saturday.

The governor said Mr Kanu stated this when he (Mr Soludo) visited the IPOB leader at the facility of Nigeria’s secret police, SSS, on Friday.

Mr Soludo said the visit to Mr Kanu was part of his ‘wider consultations’ with critical stakeholders to ensure lasting peace and security in the South-east.

“He was in very high spirits and we had quality and frank discussion in a very convivial atmosphere,” Mr Soludo said of the IPOB leader.

“He expressed sadness over what he described as ‘sacrilegious killings’ of innocent persons, kidnappings and all forms of criminalities, including the brutal enforcement of the senseless ‘sit-at-home’ perpetuated by sundry groups claiming to be acting for or on behalf of IPOB,” the governor added in a post on his Facebook page Saturday night.

The governor said the IPOB leader promised to ‘personally’ prevail on his followers, through a broadcast, to maintain peace whenever he gets the opportunity to interact with them.

“Together, we shall restore peace, security and prosperity in Anambra State and the South-east,” the governor noted.

Security in Nigeria’s South-east has deteriorated in recent times with attacks by armed persons reported almost on a daily basis across the region.

Anambra State has witnesses some of the worst attacks in the region. The attacks often target security agencies, government officials and facilities.

During his inauguration as the state governor, Mr Soludo had called for dialogue with the IPOB group and other gunmen behind insecurity in the state and region.

The attacks by the gunnen increased in the state shortly after Mr Soludo’s inauguration and announcement of an end to the sit-at-home order in the state.

The Nigerian government has accused IPOB of being responsible for the deadly attacks in the region. But the group has repeatedly denied their involvement in the attacks.

The separatist group is leading agitation for an independent state of Biafra to be carved out from the South-east and some parts of the South-south Nigeria.

Leader of the secessionist group, Nnamdi Kanu, is currently being detained in Abuja where he is facing trial for treason.

Mr Kanu is expected to appear in court on Wednesday, May 18, for continuation of his trial.