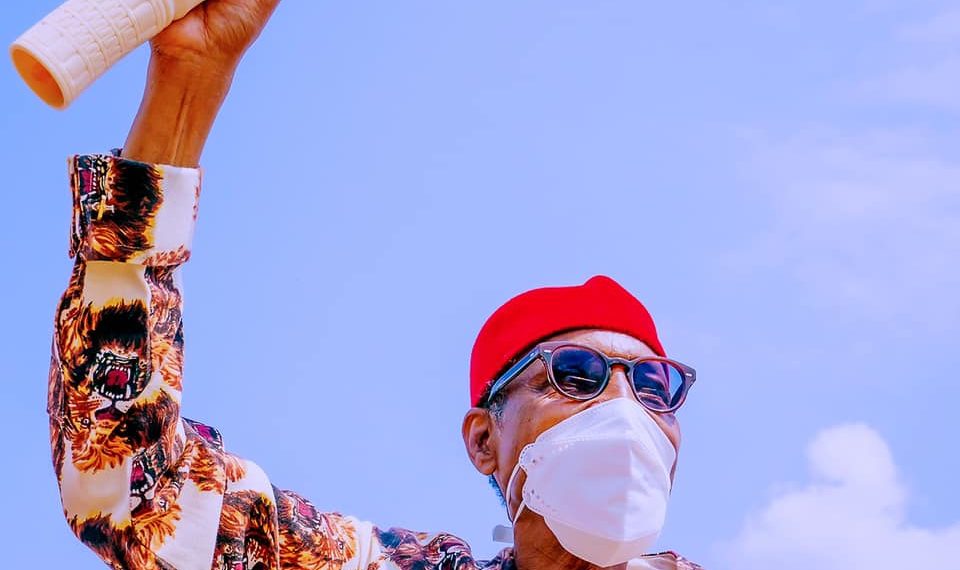 President Buhari during his visit to Imo State, September 9, 2021

“There is no town you will visit in Nigeria without seeing the Igbos being in charge of economic activities.”

President Muhammadu Buhari on Friday praised the Igbos’ “enterprising” spirit, saying that it is evidenced they are “in charge of Nigeria’s economy”.

Mr Buhari stated this in a thank you message to the people and government of Imo State which he posted on his Facebook page after his Thursday’s visit to the South-east state.

Imo State is considered to be the hub of the pro-Biafra group, IPOB’s operations in the region.

Mr Buhari was in the state for a one-day working visit to inaugurate projects executed by Governor Hope Uzodinma’s administration.

The president, while in Imo, had preached the importance of peace for the state, the South-east region, and Nigeria.

In the Facebook message afterwards, the president said the Igbos were “truly the most enterprising”.

“There is no town you will visit in Nigeria without seeing the Igbos being in-charge of economic activities. The evidence is there for everyone to see, that Igbos are in charge of Nigeria’s economy.

“It is, therefore, unthinkable for me that any Igbo man would consider himself not to be a part of Nigeria,” said President Buhari.

The president said he was pleased with the development projects in Imo, promised to support the state and the region, and thanked the government and people of Imo State for the warm reception.

“The Federal Government will complete all ongoing key projects in the South-east, including the 2nd Niger Bridge, and other major highways, as well as the railway lines and routes linking the region with other parts of the country,” he added.

The agitation for an independent republic of Biafra, led mainly by IPOB which has been proscribed by the Nigerian government, has led to killings and destruction in the South-east for some years now.

The IPOB leader, Nnamdi Kanu, is currently detained in Abuja where he is on trial for treason.

President Buhari’s message here, quite reconciliatory in tone, is a complete departure from his tough-talking remarks in the past.

However, it is unclear, for now, what impact this may have on the Biafra agitation