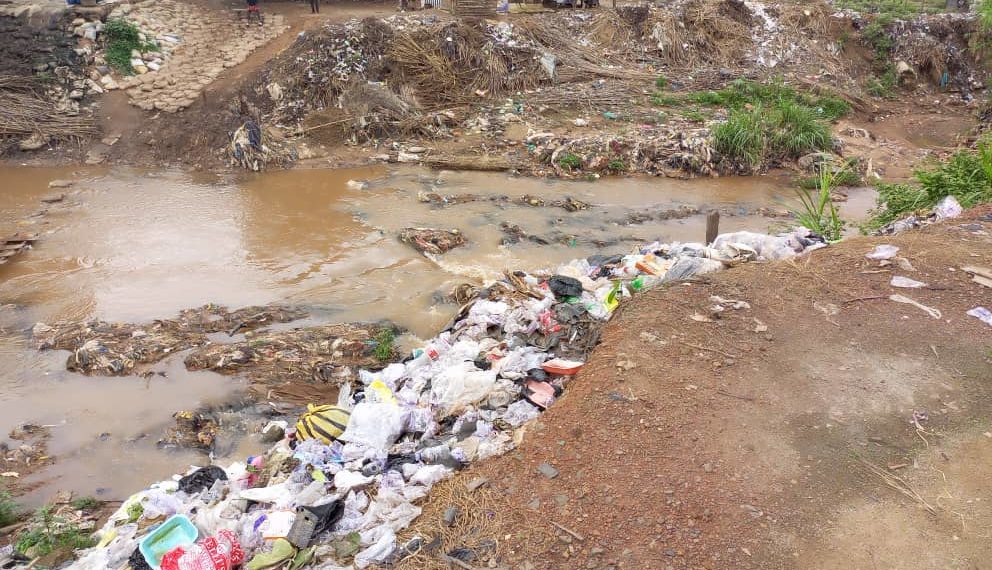 Cholera outbreak in Enugu: Floodwater near New Artisan Market in Enugu believed to be the source of the outbreak in the state.

Seven persons died initially on Saturday, but as of Monday, seven more deaths were confirmed, raising the fatality to 14.

Seven more people have died of cholera in Enugu State, authorities in the state have confirmed exclusively to PREMIUM TIMES.

The director, public health and disease control, ministry of health, Boniface Oko, who confirmed the development to our reporter in Enugu on Monday, said more than 80 people have been infected with the disease since Friday when the outbreak was confirmed in the state.

The state’s commissioner for health, Emmanuel Obi, had on Saturday announced the cholera outbreak at the New Artisan Market in Enugu, the state capital.

Mr Obi had said seven people died in the market with 19 persons identified with the symptoms of loose stool and vomiting. He said the ministry’s rapid response team, upon receiving reports of the incident, carried out an immediate investigation and “it was observed that the patients presented with sudden onset of passage of loose stool and vomiting.”

On Monday afternoon, Mr Okoro said within the past four days since the outbreak, 14 persons have died.

He said many of the infected persons were rushed to the Enugu State University Teaching Hospital, with others taken to an unidentified private hospital in the city.

“Seven persons died initially on Saturday, but as of Monday, seven more deaths were confirmed, raising the fatality to 14,” Mr Okoro said.

The director said the outbreak is due to poor hygiene practices, and particularly, improper disposal of domestic and human waste, and high consumption of untreated water in the area.

A patent medicine store owner in the area, Augustine Osuigwe, described the outbreak as a “ticking time bomb waiting to happen,” saying the poor hygiene within the neighbourhood requires urgent attention.

The New Artisan market, which is dominated by cattle sellers from the northern part of the country, is a busy market for dairy products.

This reporter, who visited the market on Monday, confirmed that the market is surrounded by slums without toilet facilities.

Residents confirmed that they only defecate in polythene bags and dump the contents in open trenches and pools of floodwater which many of the residents use to take their baths.

The health director said the state government has launched an aggressive sensitisation campaign for residents to take precautionary steps towards preventing further spread.

Mr Okoro added that all affected persons have recovered and have been discharged from the hospital after treatment.

He, however, said a fresh case of the disease was reported Monday morning, indicating the possibility of a further spread if residents do not take caution.

But the health official said no other part of the state is affected by the disease, and pledged the commitment of the state to nip the crisis in the bud before it is spread to other communities.

Asides New Artisan market in Enugu, many other parts of the country are experiencing a rising spread of cholera disease.

Cholera, a diarrheal disease that kills within hours if it is not treated, is endemic in Nigeria, with outbreaks reported as far back as the 1970s.

The ongoing outbreak, which began at the start of this year, has been confirmed in the federal capital territory (FCT) and 15 states- Benue, Delta, Zamfara, Bauchi, Kano, Nigeria, FCT, Cross rivers, Niger, Kaduna, Plateau, Nassarawa, Gombe, Bayelsa and Kebbi.

READ ALSO: Cholera still dangerous in Nigeria: Here’s what the government can do

Between January and June 27, a total of 14,343 suspected cases and 325 deaths, including 345 laboratory-confirmed cases, were reported by the Nigeria Centre for Disease Control.

Meanwhile, the NCDC update did not include the recent outbreak in Enugu and the three deaths reported in neighboring Ebonyi State, indicating that the disease is rapidly spreading by the day.

Though this year’s cholera outbreak is yet to be declared a national concern, health experts fear consequences on the country’s overstretched health infrastructure.