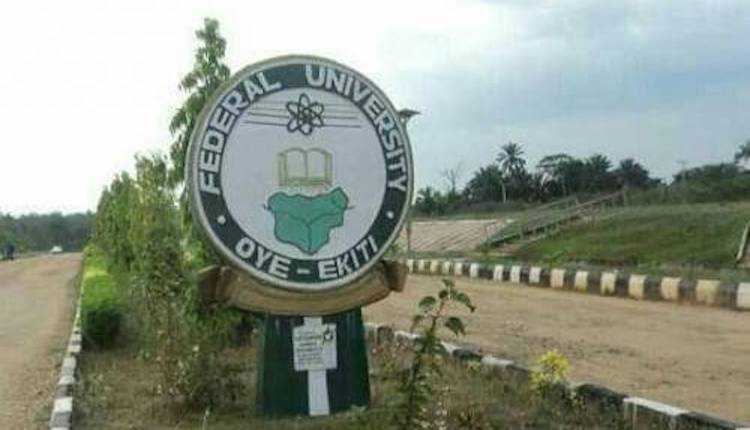 The Senate of Federal University, Oye-Ekiti (FUOYE), on Thursday, passed a vote of confidence in the administration of the Vice-Chancellor, Abayomi Fasina.

The Special Adviser on Media Matters to the vice- chancellor, Wole Balogun, said in a statement issued to journalists in Oye-Ekiti, that the vote of confidence was based on what the senate described as Mr Fasina’s exemplary leadership.

He said the senate, during its statutory meeting held at the Faculty of Science auditorium, passed the vote of confidence in the vice chancellor against the false news allegedly being carried by those he described as faceless people.

Mr Fasina was appointed in January to replace Kayode Soremekun as the vice-chancellor.

Since his appointment as vice-chancellor, two senior officials of FUOYE have been allegedly enmeshed in scandals. In April, the university’s registrar, Olatunbosun Odusanya, was sacked by the governing council over irregularities in appointments into the institution. Two weeks later, the bursar, Bolatito Akande, was suspended over misconduct.

On Thursday, Mr Balogun’s statement said: “The motion to pass a vote of confidence on the floor of the senate was moved by Prof. Olajide Oladele, a Professor and Chairman, Committee of Deans.

“He started by requesting the vice-chancellor, who is the Chairman of the senate, to temporarily step aside and allow the Deputy Vice-Chancellor (Academics), Prof. Olusola Ojo, to take over while the senate decides on the raging false social media reports portraying the vice- chancellor and the management in bad light.

“Afterwards, Prof Oladele continued by listing all the positive achievements and impacts made by the Fasina-led administration since he took over from his predecessor, Prof. Kayode Soremekun, on February 11.

“The achievements include: promotion of over 20 academic staffers, whose promotion to professorial cadre had been delayed for years for various reasons, most of which were political.

“Purchase of fully-packaged tractor and other equipment to boost agricultural revolution in FUOYE and approval of the take-off of FUOYE College of Medicine in October.

“Provision of amenities, such as electricity and pipe-borne water, for departments; establishment of a printing press, livestock farming, establishment of bakery and canteen, courtesy of the newly-created FUOYE Ventures.

“Establishment of FUOYE Institute of Part-Time Studies, which is currently admitting qualified students and which is meant to boost the internally-generated revenue (IGR) of the university.

Others, it said, were provision of a 50-seater shuttle bus for subsidised transport system for members of staff, majority of whom come from Ado-Ekiti on daily basis to Oye-Ekiti and provision of Sienna car for SUG, led by Alabi Johnson.

The statement also quoted Mr Oladele as expressing happiness with the Fasina-led administration, saying that there was academic freedom for professors and other scholars in the institution.

“The final leg of his motion was a request that if his motion was adopted and ratified by senate, the resolution should be so communicated to the Governing Council of the university,” it said.

The statement added that all members of the senate, the highest decision-making body of the institution, comprising all professors, deans of faculties, heads of departments, directors and heads of academic-related units were unanimous in their support for the motion.

“In conclusion, Prof Ojo instructed the secretariat to communicate the senate decision to the governing council and strongly advised all rumour mongers to desist from spreading or propagating false news on the Fasina-led administration and FUOYE in general.

“He (Ojo) further emphasised that anyone or organisation engaging in any form of false representation of the institution would be made to face legal action by the university,” the statement said.