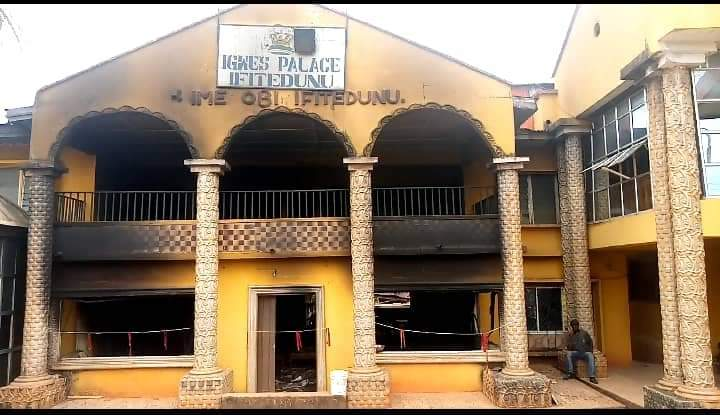 The attack on the palace of Emeka Ilouno, the traditional ruler of Ifitedunu in Dunukofia Local Government Area

The palace was set on fire by yet to be unidentified people during which vehicles were also razed.

The police in Anambra have launched an investigation into the attack on the palace of Emeka Ilouno, the traditional ruler of Ifitedunu in Dunukofia Local Government Area of the state.

Toochukwu Ikenga, Police Public Relations Officer in Anambra, made the disclosure in a statement on Monday.

Mr Ilouno’s palace was set on fire by yet to be unidentified people during which vehicles were also razed.

According to the traditional ruler, I thank God that there is life, my palace was set ablaze in the dead of the night, my jeep was also burnt.

The police said two persons sustained injuries and were receiving treatment in an undisclosed hospital.

“The Commissioner of Police in Anambra State, Mr Monday Bala Kuryas has ordered investigations into the unfortunate attack of the Palace of Igwe Ifitedunu, HRH Dr Emeka Ilouno.

“The resultant fire outbreak and damage to property- including the Igwe’s official vehicle.

“Information so far available to the police reveals that two persons sustained fire-burn injuries and are currently receiving treatment in a hospital.

“The fire was put off by the combined efforts of good spirited individuals around the area and the area has been cordoned off.

“The CP reiterates that the Command will not deter and will surely deliver on its mandate on protection of lives and property in the state,” he said.