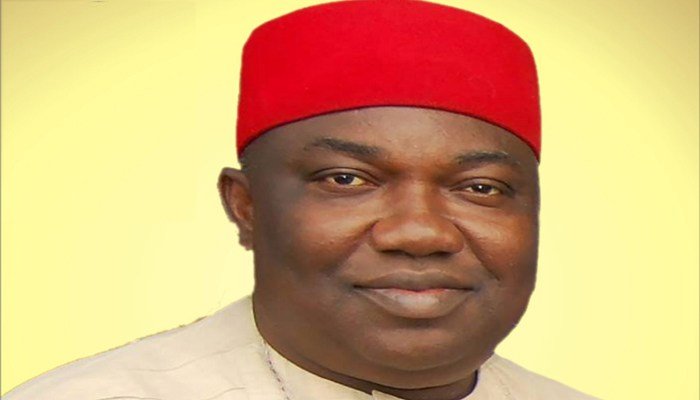 The protesters also accused the governor of walking out on them

The Enugu State government has been accused of hiring thugs to threaten peaceful #End SARS protesters in Enugu on Saturday.

Top music stars from Southeast, Flavour, Phyno, Zoro, KCee and music producer, Mastercraft, made the allegations in a statement they jointly issued on behalf of the protesters.

The statement was posted on their verified Twitter handles.

They also accused the governor of walking out on them and refusing to answer their questions.

The stars said that if anything happens to any protester, the Enugu State government should be held responsible.

“Enugu today our lives were threatened and we are making it clear that if ANYTHING happens to any single one of us or any protestors, let it be known that it was done by the ENUGU STATE GOVERNMENT!”, began the statement.

The protesters said they had marched from the Enugu Main Market popularly known as Ogbete Market to the Government House peacefully.

“Today, our peaceful protest in Enugu from Ogbete Market to the Enugu State Government House was going well until we reached the government house”.

“Along the way, we noticed a group of thugs joined the protests”, they said.

Continuing, they alleged that “the governor came out but refused to speak up and address the protestors, instead he addressed the thugs.”

“The thugs tried to fight us but we maintained peace because we recognized their plan”, they further alleged

The music stars said they made sure the youth remained calm yet the governor refused to answer their questions.

“Instead he walked out on us, unapologetically, with the thugs following him. We made it clear that we knew the people he was pretending to address were paid thugs”.

They, however, vowed that the antics of the state government will not deter them from their peaceful protests.

“As we have been saying: The movement won’t stop! We come in peace as always! #NewNigeria #NewEnugu #EndSARS #EndSWAT #EndPoliceBrutality”, they added.

Meanwhile, the Enugu State government has given a separate narration of what happened.

In a statement on Saturday, the state government said the governor, on Saturday, for the second time in two days, addressed some youth in the state who were protesting against #PoliceBrutality in the country.

According to the state, the governor announced the setting up of a judicial panel of inquiry to investigate complaints of police brutality or related extrajudicial killings, as demanded by the protesters.

Gov Ugwuanyi, who addressed the #EndSars protesters amid cheers, reiterated his endorsement to the state government’s position on the demands made by the protesting youth.

He disclosed that the panel will be chaired by a High Court Judge with two representatives of the Civil Society Groups and one retired Police Officer of high repute as members.

The governor, who applauded the protesters, led by two prominent artists, Flavour and Phyno, for the peaceful nature of the protest, expressed the solidarity of the government and people of the state to their cause.

He added that the panel is saddled with the responsibility of receiving and investigating complaints of police brutality or related extra-judicial killings; evaluate the evidence presented/other surrounding circumstances and draw a conclusion as to the validity of the complaints and then recommend compensation and other remedial measures where appropriate.

He also announced that his administration will establish a human rights public complaints team of between two and three persons to receive complaints on an on-going basis, adding that the team will be established by the special committee on security and human rights.

“We have also resolved that we will set up complaints commission which the public can relate by telephone or social media channels,” the governor said.

While appreciating the people of Enugu for the overwhelming support and goodwill especially when they reelected him in 2019 with an unprecedented 95.54 per cent of the valid votes cast, which he said was a referendum on his performance, Gov Ugwuanyi reassured them that his administration will do all that it has promised to do for the people in spite of the nation’s challenges.

The deputy governor, Cecilia Ezeilo, who accompanied the governor to the event, had on Tuesday, presented the state government’s position accepting to address all the demands made by the protesting youth also led by Flavour and Phyno.