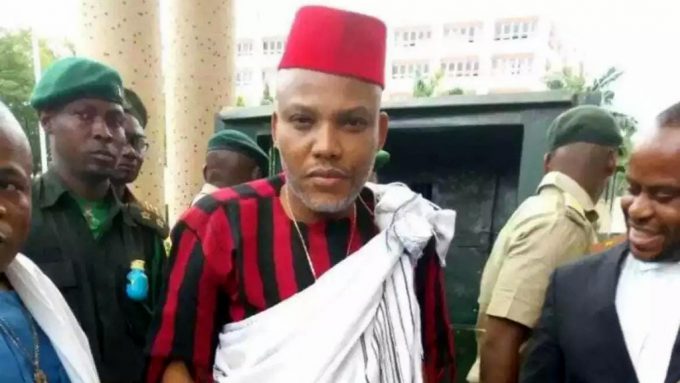 Nnamdi Kanu, leader of the Indigenous People of Biafra (IPOB)

IPOB denies responsibility for attacks on security agents in southeast

Security agents were recently dispossessed of their service firearms in two separate attacks by unidentified assailants in Abia state.

The proscribed secessionist group, Indigenous People of Biafra (IPOB), has denied being responsible for the recent attacks on security operatives in South East.

This followed reports of attacks on the operatives in some parts of the southeast by unidentified persons during which some of them were dispossessed of their service firearms.

The attacks reportedly began shortly after the recent clash between the group’s members and security agents in Enugu.

At least, two secret service officers and some members of the group died during the clash which occurred when security agents tried to break up a meeting of the group in a primary school in the city.

Shortly after that, there were reports of attacks on security agents in various parts of the southeast with the group suspected of orchestrating the attacks to retaliate the killing of its members.

In a statement by the IPOB spokesperson, Emma Powerful, the organisation described the allegation of carrying out the attacks as false and propaganda.

It said the allegation was an attempt to discredit IPOB before the international community and wondered how members of an ‘unarmed organisation’ would attack armed security personnel and escape unhurt.

“We are not armed and have no plans to pick up arms. But should we decide to go into arms struggle which is not an option on the table, it will not be a secret affair. We won’t depend on arms collected from any security agent to defend Biafra. That is childish and an insult to IPOB,” it said.

“Their latest lie is the allegation that IPOB is responsible for the purported attacks on security operatives in South East and South-South. We find it amusing how these unscrupulous elements without any contact address would think they can come to limelight via untenable allegations against a globally recognized peaceful group like IPOB.

“We knew when and how the DSS recruited them to launch verbal attack against IPOB and its Leader, Mazi Nnamdi Kanu. But we want to inform them that IPOB is properly rooted and cannot be moved by false allegation and propaganda.

“These irritants have sustained their unwarranted attacks on IPOB through fabricated and blatant lies, and cheap propaganda to impress their pay masters, the DSS.

“Assuming but not conceding to this blatant falsehood: How can an unarmed man attack a fully armed security agent and escape unhurt? Doesn’t it sound funny? What a shameful allegation! We know their aim: to discredit IPOB before the international community which is now interested in the matters we have raised concerning the atrocities perpetrated in Nigeria.

“Ordinarily we wouldn’t have bothered to dignify these detractors with a response as we have since known their stock in trade, but for the sake of the gullible ones and some innocent minds. There is no iota of truth in this fictitious claim. IPOB is not responsible for any attack against any security agent”, Mr Powerful said.

The group warned those peddling such lies against IPOB to desist forthwith or be ready for the consequences of their blackmail against innocent people.

“Unfortunately for them, the era of propaganda and cheap blackmail is gone. Frivolous and concocted allegations designed by DSS and government of Nigeria to blackmail IPOB can no longer stand. The world now knows better. IPOB’s non-violent ideology about the Biafra project is well known and cannot change. But the inalienable right of the oppressed to defend himself against the oppressor is not illegitimate.

“We are not armed and have no plans to pick up arms. But should we decide to go into arms struggle which is not an option on the table, it will not be a secret affair. We won’t depend on arms collected from any security agent to defend Biafra. That is childish and an insult to IPOB.

“All we need is Biafra, our own country which has been in existence before Britain created Nigeria and unequally lumped us together with these murderous Fulani that value cows above human lives. Marriage isn’t by force. We are tired of this bondage and want a referendum to determine our fate. Simple!

“We are monitoring and taking records of every single attack on our people and how Nigeria government and her security agencies abduct IPOB members and use chemicals and acid to murder many of our people in their custody to conceal evidence while those inconsequential and unreasonable groups claim to be Igbo group won’t see the barbaric massacre of our people. Nigeria government and her security operatives as well as Biafra traitors and saboteurs in Biafraland and elsewhere must understand that IPOB cannot be decimated contrary to their erroneous calculations, and wishful thinking.”

Meanwhile, the Abia State Government said it has received information of two separate attacks launched by yet to be identified persons against security agents in the state.

The government, however, did not mention which security agencies were involved or the exact location of the attacks. Rather, it confirmed that the security agents were dispossessed of their service arms during the attacks.

The Commissioner for Information, John Kalu, who confirmed the attacks in a statement, said the state governor, Okezie Ikpeazu, has directed security agencies in the state to ensure that perpetrators of the attacks are apprehended immediately and the arms recovered.

“We also wish to strongly advise individuals and corporate organisations in the state to maintain high level of vigilance and take necessary measures to protect themselves, their customers and establishments, to complement the efforts of government and security agents”

Mr Kalu urged residents to go about their normal duties as the government has activated all necessary security protocols to protect lives and property of all citizens and residents.

“However, all suspicious movements and persons should be promptly reported to the Abia State Police Command via this number; 0803 541 5405”, he added