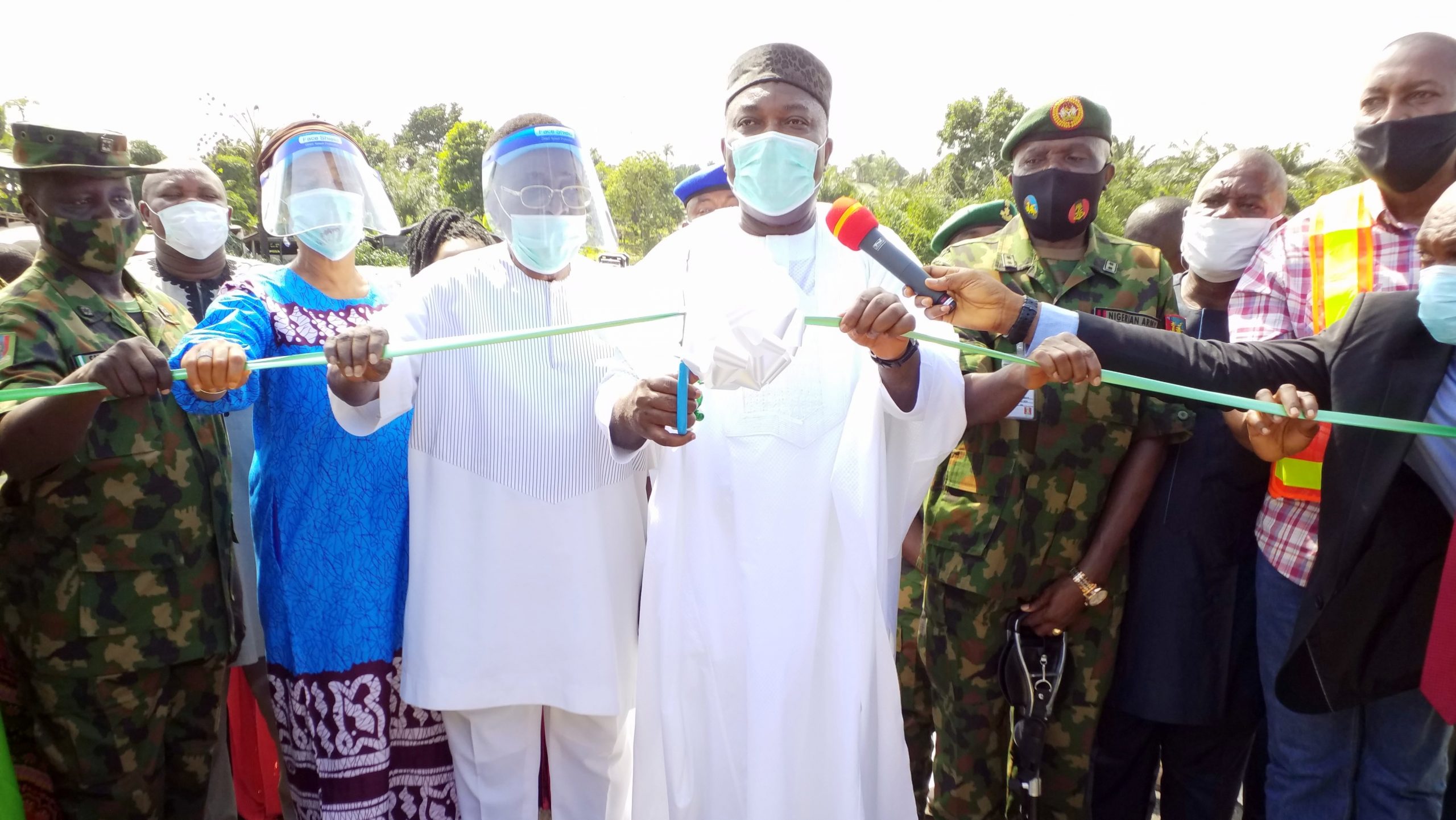 Mr Nwobodo, who spoke during the inauguration of the bridge by Mr Ugwuanyi, expressed his “greatest gratitude” to the governor for “constructing this bridge for my community on your own initiative and without any prompting.”

The contract for the construction of the bridge was awarded to the 82 Division of the Nigerian Army Engineers by the Enugu State Government.

Speaking further, Mr Nwobodo said that he was delighted that Mr Ugwuanyi has actualised the long-held dream of his community, a feat that past governors could not accomplish.

Mr Nwobodo who was accompanied to the event by his wife, Pat, also commended Mr Ugwuanyi, for entrenching peace and good governance in Enugu State.

He pointed out that the existing peace in the state has brought security and rapid development, especially in the rural areas, saying: “Thank you (Ugwuanyi) for this great honour you have done to me. I thank you for wiping away my tears”.

His words: “Since 1999, I have never been to Enugu and stayed more than two weeks. But since this governor came, I have been in Enugu for the past six months because of the peace he has entrenched.”

Inaugurating the bridge in the company of the General Officer Commanding 82 Division of the Nigerian Army, Lasisi Adegboye, Mr Nwobodo, his wife and other dignitaries, Mr Ugwuanyi stated that his administration was compelled to construct the bridge because of the need to unlock the tremendous opportunities for the benefitting communities in line with the state government’s rural development agenda.

The governor disclosed that his administration “made a deliberate choice of awarding this project to 82 Division Army Engineers owing to their rich history of competency in the delivery of resilient Bailey Bridges”, adding that “the event of today evidently justifies this procurement decision”.

According to him, “this project dovetails into the integrated rural development agenda of our administration; enhancing connectivity and access to homes/businesses/communities as well as stimulating commerce/economic growth in the benefiting communities.”

Mr Ugwuanyi who recalled that his administration had in its first tenure completed 11.5km of asphalted road network in Enugu South LGA that are already in use, stated that “our administration further commits to improving the approach roads to this Bailey bridge after the rainy season.”

He, therefore, implored the residents and all users of the bridge and other roads to avoid unnecessary physical damage to them to ensure their durability.

Earlier in his speech, the Supervising Engineer of the bridge construction, Samuel Bitrus, expressed special gratitude to Mr Ugwuanyi for giving the Nigerian Army the opportunity “to be partners in your developmental strides for the benefit of the people of Enugu State, particularly the Amechi community and the entire humanity in general”.

Mr Bitrus, a brigadier general, explained that the “Bailey Bridge is a 14-Bay steel deck bridge of Single Truss Single Storey (SS) configuration and a class 16 Military Load Capacity (MLC/Tons) bridge”. He further explained that “the entire bridge is supported by the substructure made up of the home/far bank abutments and an intermediate pier built to specification with 6-8m deep piling work to guarantee stability capable of withstanding any volume of downpour”.

He, therefore, on behalf of the Chief of Army Staff, Tukur Buratai, congratulated and appreciated Mr Ugwuanyi for “attaching importance to linking up communities in dire need of infrastructure through projects such as this one, so much so that he is here to commission this project himself.”

Other dignitaries at the event include former Nigerian Ambassador to Japan, Goddy Agbo; the member representing Enugu South (Rural) in the State House of Assembly, Onyinye Ugwu; State Commissioner for Works and Infrastructure, Greg Nnaji, and the Chairman of Enugu South LGA, Monday Eneh.