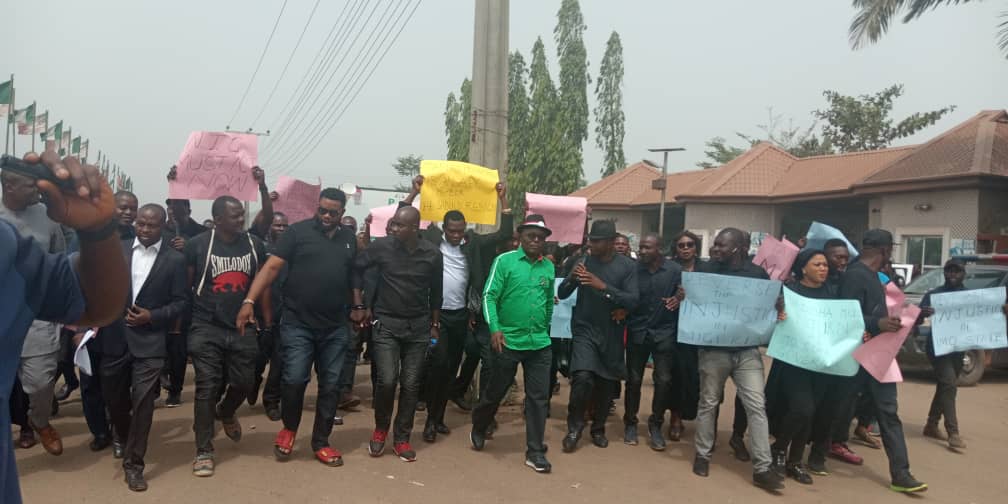 The Peoples Democratic Party (PDP) in the South-east has asked the Supreme Court to reverse its judgement on the Imo State governorship election.

The National Vice Chairman of the party for the zone, Austin Umahi, gave a 24-hour ultimatum during a peaceful protest by the Ebonyi State chapter of the party in Abakaliki, the state capital.

He said the Supreme Court judges who gave the verdict will not know peace unless they reverse the judgement.

The court had last week sacked Emeka Ihedioha of the PDP as Governor of Imo State.

The court also declared Hope Uzodinma of the All Progressive Congress (APC) as the winner of the election.

The judgement has stoked controversy and protests across the country and Ebonyi on Monday joined in the protests.

Thousands of the party’s faithful in the state marched around the city to protest what they described as injustice and a rape on democracy.

The protest, which commenced from the state party secretariat, terminated at the Federal High Court where the State Chairman of the Party, Onyekachi Nwebonyi, and Mr Umahi addressed the party faithful.

They bore placards some of which read: “NJC must act now”, “Imo guber case: Supreme Court must revisit judgement, Ihedioha must return as Imo State governor”, “Save Democracy in Nigeria, Judiciary is now the lost hope of the common man.”

The protesters wore black clothes to reflect their grief over the judgement.

Mr Umahi said the party was giving the Supreme Court and the National Judicial Council 24 hours to reverse the sack of Mr Ihedioha.

Mr Umahi described the judgement as unfortunate, saying the judiciary has lost the respect it used to command in the past from the masses.

“For how long shall we continue in sin that grace may abound? And the Bible says, God forbid. We want and we are saying it very categorical that the Judgment of the Supreme Court is a perverted judgement and must be reversed immediately, for the oneness of this nation and for the furtherance of democracy. They should reverse and reinstate the man that was elected by the Imolites and he is the RT. Hon. Emeka Ihedioha and not a man that was imported and through the back door imposed on the people of Imo State.

“He is an agenda and we understand the agenda that is in him and will resist him with all that we have. That judgement cannot stand. We are here as lovers of democracy.

“It is time to rise up and say what is wrong is wrong. We have risen as democrats to say that what is wrong is wrong. To say, that we shouldn’t allow our judiciary to die. Once judiciary is captured, we are finished in this country and from all indications, we can see that we have a compromised judiciary. We can see there is no independence again. There is no rule of law in this country.

“Where are we going as a country? This is worst than a banana republic. You are talking of awarding victory to someone that came fourth in an election? I don’t know where the Supreme Court got that political Mathmatics? From all calculations and from all permutations, it is wrong before God.”

On his part, Mr Nwebonyi decried the removal of “a duly elected governor.”

“As a lawyer and even the layman will agree with me that court does not admit evidence from unlawful custody. A situation where somebody will be in the comfort of his room and put up a result to represent INEC result, such results were not tendered by INEC officials.

“Now the question is this? Who tendered those report at the Supreme Court? Those witnesses that tendered the result are they the proper witnesses? It is a trite law that it is only INEC and its ad-hoc staff that can tender election result before a tribunal or any other law court.