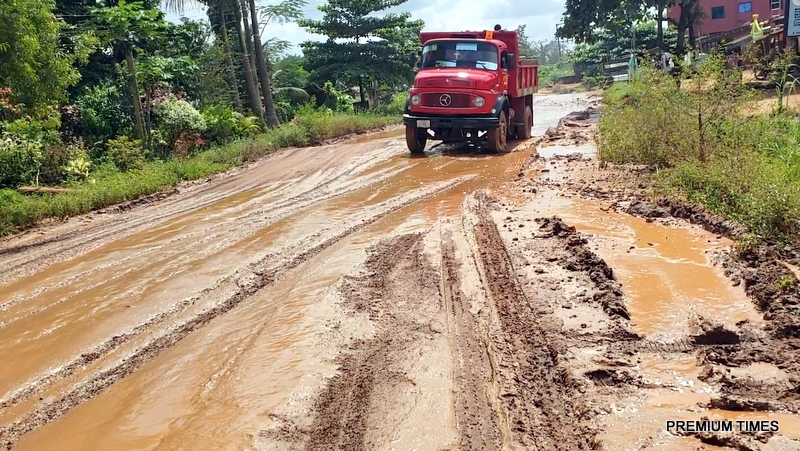 Many roads in Imo State are littered with potholes, and prone to flood due to lack of proper drainage system. Unfortunately, these roads include those whose contracts had been awarded and payments made.

It is on one of such roads that Fervent Chibuike, a motorcyclist, earns his living.

The roads cause accidents and damage our machines (motorcycles), Mr Chibuike told this reporter as the duo prepares to journey from Bank Junction in Mbaise Local Government Area (LGA) to Amachara in Ahiazu-Mbaise LGA. As if to prove him right, the trip was aborted midway after the tyre of Mr Chibuike’s motorcycle got punctured.

The Umedo-Udoha and Ikeduru-Amimo road, that also connects Amachara, is a stretch of red earth, with high steeps and deep ditches that make vehicular movement almost impossible. In the middle of the road, there is a gaping crevice that disconnects the two communities.

Nkedulu Eucharia, a resident, said the road has been like that for about three years.

“It has been a long time we have been suffering from this. The main road is demarcated into two. There is no way to pass through there,” she said.

The alternative pathway, where Mr Chibuike’s tyre got punctured, was created by a selfless citizen, Ms Nkedulu explained.

On the same road, signposts of projects contracted out by the Niger Delta Development Commission (NDDC) are erected about 200 metres apart. The commission was created to fill such developmental gaps in Imo and eight crude oil-producing states in the region.

Across Imo State, similar NDDC projects have been contracted but many of them are either abandoned, poorly done, or not existing at all, as discovered during this investigation.

According to an NDDC contracting document made available to the Premium Times Centre for Investigative Journalism (PTCIJ), over the last four years, at least N5.1 billion was budgeted for projects in Imo State by the commission. Out of this sum, N3.8 billion was allocated for roads and bridges.

Residents in the state, however, have continued to question the importance of the commission as they grapple with bad roads.

“What has NDDC done?” asked Emeka Nkolo, a resident in the state.

“They are even worse,” another man interjected before Mr Nkolo could finish his statement.

The two men’s anger are justified.

Mr Nkolo sells vehicles spare parts on Umuezeala road in Ehime Mbano LGA. NDDC awarded the road to Bash & Bolts Limited, for urgent rehabilitation in 2017. He said the road lasted barely 12 months after it was done.

“This road, as at December last year it was rehabilitated,” he said, pointing to the dilapidated Umuezeala road. “It cannot survive one year after. What kind of quality of job is that? There are records of roads that have lasted over 20 years.”

The bad state of the road has diverted vehicular movement away from it, a development that has affected Mr Nkolo’s business negatively.

“Vehicles are no longer moving out here because of that, we have been cut off,” the businessman continued.

“The only route now they are taking is the other way round. This is a link from Aba to Enugu to Okigwe. Even vehicles going to Lagos pass through here to link Orlu but because of the bad road, nobody is passing through here and the business is not moving. I come out here from morning till night, nothing is moving.”

It is doubtful that the Umuezeala road had ever been tarred. The wide potholes on the road are covered with red mud. Motorcyclists no longer pass the main road; rather they jostle for the walkways with pedestrians hopping by the sidewalk to find dry spots to put their legs.

Mr Ifeanyi, a commercial cab driver, said apart from trailers, smaller vehicles plying the road are easily damaged. He parked his cab with a mechanic along the road. He said the bad road damaged his silencer.

“Each time we pass, most cars sink here. The road is not motorable. Only last week, cars and Okadas sank here. It is very bad,” lamented another motorcyclist.

But three years after the contract for the road was awarded, the road is still a nightmare to its users. Although the Ihitte/Uboma local government secretariat is situated along the road, no attention has been given to it. Motorists say it is usually flooded during rainy seasons.

“The dry season is an opportunity for them to fix the road but nothing is being done,” one of the motorists said.

A roadside mechanic, who declined to give his name, said the bad road is the cause of many faulty vehicles he repairs every day.

“Well, if their cars don’t get spoilt, how will I get money?” he joked.

“But jokes apart, the road should be repaired. Drivers are really suffering on this road. There is usually heavy traffic on the road during the week. You can see the road and record because today is Sunday. If you had come here during the week, there will be traffic.”

The road that leads to Mgbele from Oguta Motel is tarred. NDDC awarded the projects to Atlas Cedar in 2016. However, an overflowing river has overtaken half of the road.

A ferry boat is required to cross the road– now covered in water– to the other side. The young man who operates the boat charges N100 per head. Motorcyclists ferry themselves and their motorbikes to connect the other side of the road.

Residents say it happens every year, usually between September and December.

A civil engineer and Head of Operations at BOLCON Associates Limited, Victor Ajibola, said the condition of the road is a fault from the contractor.

“The problem is with the design of the road,” Mr Ajibola said. “Before construction, surveys need to be conducted on the road, then it needs to be properly designed. The survey and design would indicate that that location is a depression and as such the road would need to be raised and a culvert would be designed to accommodate the river flow.”

“The reason why this problem is recurrent is because there was no design and they are just constructing it. This would always lead to continuous failure of the road,” he added.

The engineer said the contractor would have to go back to the drawing board and come up with an appropriate design to salvage the road.

“The solution is to engage a consultant that would conduct a proper survey and undertake all necessary studies; this would, therefore, lead to a good road design,” Mr Ajibola said.

“Now, the design that would be done would ensure that all water bodies along or across the road is taken into consideration and would be taken care of through provision of culverts or bridges

“But you cannot come up with a one-off solution for this without doing all necessary survey and designs. Most basic thing is to have a culvert to pass the streamflow underneath the road.”

The Oguta Motel to Mgbele road is not the only poorly constructed road, many of the completed roads tracked by this reporter suffer one deficiency or the other. For some it was lack of drainage system, others it was that the drainage was poorly done.

In Nwangele Local Government Area, many of the roads were constructed with uncompleted drainages. The tube-like holes were dug on both sides of the road but the paths lead water to nowhere.

Mr Ajibola said the lack of water path on the road would lead to erosion.

“Based on the fact that there is no passage for the water to pass underneath the road. This would lead to the formation of gullies across the road,” he stated.

Indeed, some part of the tarred roads, awarded to various contractors three years ago, have been washed away. There are also multiple potholes on the roads. A resident, Elizabeth Nwachukwu, whose home is by the Abba-Owerri-Nkworji road (Lot 1), said workers were still on the road three months ago.

Mr Ajibola said the solution is to construct a culvert that would collect water from the drain on one side of the road and pass it to an adjoining drain on the other side.

Other roads, like Nkwo Umuowa road in Orlu LGA, that were slated for construction are yet to start, years after.

According to a document seen by PTCIJ, the Nkwo Umuowa road was slated as an ongoing project as at 2011 but there was no sign of an ongoing work when this reporter visited in November of 2019.

Emmanuel Onyema, a resident, said contractors came on the site about three years ago but merely took the survey, did preliminary works and went back.

“Two to four years ago, they came up and said they were going to construct it under NDDC but after using the dredger to dredge it, they went and never came back again. The road is not motorable at all. A pregnant woman cannot pass this road without feeling pains.”

When asked about the several uncompleted roads in Imo State, the NDDC spokesperson, Charlie Odili, said he has no comment.