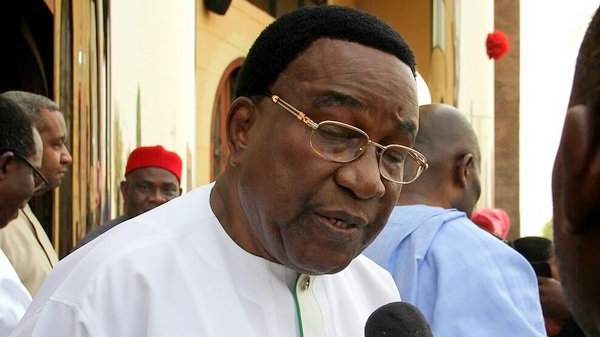 Disquiet in Enugu APC over ‘imposition of candidates’

As the All Progressives Congress (APC) gets ready to submit its list of candidates for various elections to the Independent National Electoral Commission (INEC) on Thursday, members of the party in Enugu State have cried of imposition by some leaders of the APC in the state.

Those accused of imposing their candidates include former governor, Sullivan Chime; former governor of Old Anambra State, Jim Nwobodo and a chieftain of the party, Baywood Ibe.

The Director-General of the Voice of Nigeria (VON), Osita Okechukwu, who was a senatorial aspirant for Enugu West district told PREMIUM TIMES that he is one those who were shortchanged by some chieftains of the party in the state.

Mr Okechukwu said a “cabal”, headed by Messrs Ibe, Chime and the gubernatorial candidate, Ayogu Eze, were behind the imposition.

“I am (a) victim of their ignoble manipulation of valid results. They imposed Juliet Ibekaku who neither truly participated in the primary nor in last year’s November local government elections in Enugu State, as the candidate of Enugu West senatorial district,” he said.

Mr Okechukwu, who spoke to PREMIUM TIMES over the telephone on Wednesday said another aspirant who “suffered the same fate in Igboeze North/South Federal House is Bato Ugwoke”.

Mr Okechukwu added that “a host of others like Ejike Okolo, Gp Capt Joe Orji were all casualties”.

The VON DG said the case of Mr Ugwoke is even more baffling. He said the aspirant ran unopposed and was declared winner by the panel sent from the national headquarters of the APC.

“As I speak to you now, they are trying to smuggle in somebody else, against the deadline by INEC,” he said.

Also, a female senatorial aspirant from the state, Adaku Ogbu-Aguocha, accused the party chieftains of “playing god with the destinies of people who paid through their noses for the party nomination forms”.

She said imposing people who did not participate in the primary process is a threat to the internal democracy of APC.

Another aspirant, who declined to be named for “security reasons” said ‘these people’ simply “sit in a hotel room at Nike Lake Hotels to write the results of primary election that never held”.

“The actual ward and local government results were scribbled on a torn piece of paper and discarded. No one has even seen a results sheet to verify the votes.

“90 per cent of all positions available were allocated to recent PDP decampees, People whose loyalty cannot be counted on,” he said.

One of the chieftains of APC accused of the imposition, Jim Nwobodo, however, said “it is simply (a) misconception”.

He said all those being accused are neither chairmen nor secretaries of the APC in the state and could not, therefore, have carried out the offence for which they are being accused of.

The elder statesman said what he often does is to settle any difference that may arise among members of the party in the state.

“My position is always advisory. I am not running for any office, I have no reason to protect any particular interest,” he said.