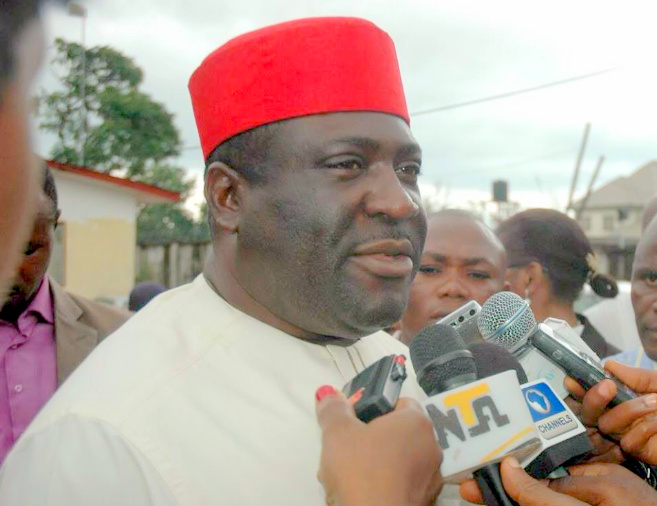 The Imo State Deputy Governor, Eze Madumere, has resumed duties two months after he was sacked by the state lawmakers.

Upon resumption Wednesday, the official declared loyalty to the governor of the state, Rochas Okorocha.

For months, Mr Madumere had been embroiled in a supremacy battle with Mr Okorocha, who is backing his son-in-law, Uche Nwosu, as his successor, against his deputy, who is also in the race.

Mr Madumere was on July 30 sacked by 19 of the 27 members of the Imo House of Assembly. But the State High Court Tuesday held that the controversial removal did not follow due process, therefore making it illegal.

Benjamin Iheka, the presiding judge, in his ruling nullified the removal.

The political battle within the Imo State All Progressives Congress (APC) fold saw the birth of parallel factions in the party.

It is believed that Mr Madumere’s removal from office was as a result of his dispute with Governor Okorocha as he was accused of gross misconduct and abandoning his duty for three months.

“Governor Rochas Okorocha is my boss and will always remain my boss as long as I am the deputy governor of Imo State”, Mr Madumere said in a statement by his special assistant, Uche Onwuchekwa on Wednesday as he resumed.

He said he had forgiven those who orchestrated impeachment procedure against him, adding that he bears no grudges.

“I don’t have any grudges against anybody; and those who orchestrated the impeachment plot against me, I have forgiven you. I am a child of God.”

The deputy governor formally declared his intention to contest for the governorship seat of the state.

He also reeled out his “seven-point social contract with the people of Imo state”.

“My covenant with Imo will be based on the following: youth empowerment, which will be anchored on agriculture and agro-business, information & communication technology and entrepreneurship across the local government areas of the State.

Meanwhile, the state government is yet to officially speak on the deputy governor’s reinstatement.

When contacted Tuesday evening, Mr Okorocha’s spokesperson, Sam Onwuemeodo, said he was abreast of the ruling but cannot react until he sees the court judgement.

He neither returned or responded to subsequent text messages to his phone on the matter on Wednesday.