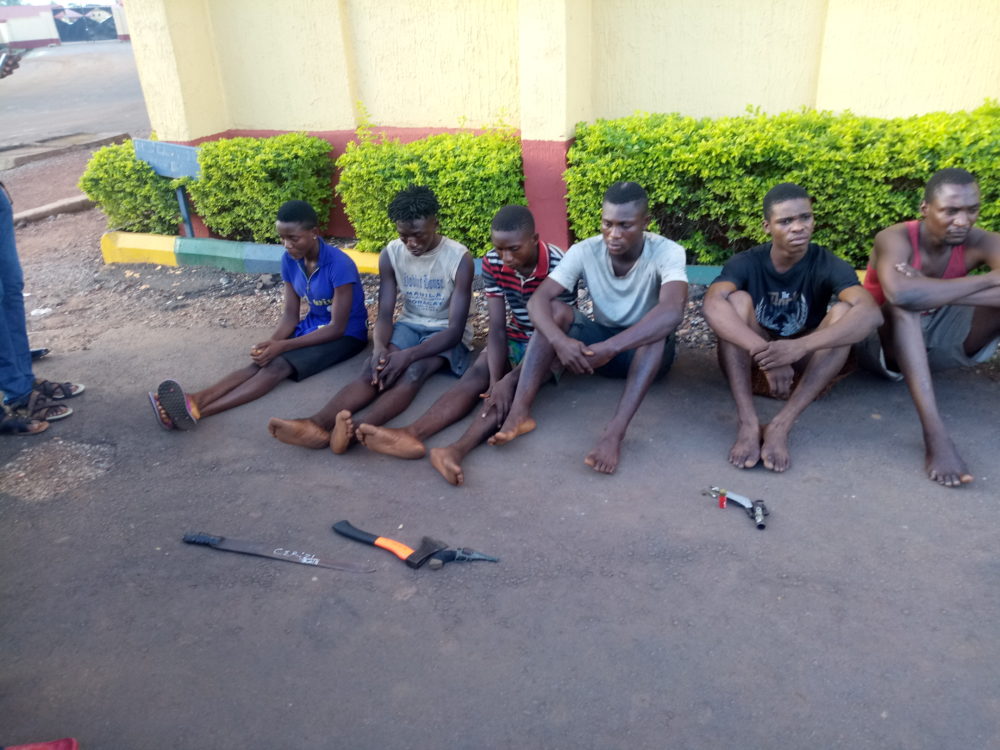 Some members of the six man robbery and kidnapping syndicate that kidnapped, robbed and attempted to murder a businessman in Ebonyi State, Mr Monday Udoka Oke

Why we tried to kill Abakaliki hotelier — Kidnap suspect

Some robbery and kidnapping suspects have said they attempted to kill an hotelier in Abakaliki, Ebonyi State, Monday Oke, because he identified one of them.

They spoke with journalists in Abakaliki while being paraded by the police alongside other suspects.

Chinonso Desmond, described as leader of the group, said he shot and tried to kill Mr Oke because one of them who is still at large suspected the businessman knows him.

“It is my friend MD Mohammed that introduced me into kidnap of Monabliss (name of the alleged victim’s hotel),” Mr Desmond said. “It was in the night that they called me on phone in Enugu State and I came down to Abakaliki for the kidnap of the man.

“We moved to the street where Monablis Hotel is located. We were smoking and saw Monablis when he was coming out of his hotel and we followed him up.

“We blocked him with his car. After we blocked him, we took him to a place called Azugwu in Abakaliki and where the man gave us N150,000. MD forced him to do mobile transfer for us to get more money from him and he did the transfer.

Mr Desmond, who confessed to shooting the businessman, said they took the decision to kill him so he would not identify them to the police.

“After the transfer, MD said the man knows him very well. We took him to one river and I don’t know the name of the river but they called it Ebonyi river. The man was begging us, when he tried to escape, we shot him. I was the one that shot him, we were not sent by anyone to kidnap him.”

Loveth Nnenna, a female student of Ebonyi State University, said she was introduced to the group by her boyfriend who was arrested on his way to to the state from Enugu with some guns.

“I was arrested for kidnapping and armed robbery. I was at home when Desmond and MD, the one that ran away, came to me at Azugwu where I was staying and told me to enter car and I entered car,” Miss Nnena narrated.

“I didn’t know where we were going but we landed in a bush and when we got to the bush, I saw two guys lying down. Within a short period of time, Desmond carried Monabliss and came in. Then, they released the two guys that were lying down.

“Desmond told Monablis ‘Oga, let’s do business’ and he said no problem. He asked Monablis how much do you have in your account and he replied him. He told Monablis that he will transfer monies into our individual accounts and he agreed.

“They then carried Monablis into one bush where they shot him. I was not there when they shot him. When they came back, they started fighting themselves saying they didn’t shoot the man very well that he ran away. Desmond then ordered two guys to go into the river and find Monablis, that the man is not dead.”

Miss Nnena further narrated how she was initiated into the group by the members.

“I am final student of Ebonyi State University, Department of Sociology. I know this group as cultists and I met them in this semester. My boyfriend was once in police cell in Enugu and it was through him that I met Okechukwu, one of us.

“They told me that my boyfriend is coming from Enugu to shoot me because I reported the person that stole my cell phone, that he asked me not to report to the police and I reported to the police. On his way coming back with two guns, they arrested him with the two guns.

“It was on that day that Monablis was kidnapped that I was initiated into cultism, it was the group that initiated me. I belong to Bagger Confraternity”.

Another suspect, Murtala Usman, accused of buying a necklace stolen from the hotelier, denied being involved in the kidnap.

“I don’t have any role in the kidnap. I am doing Bureau De Change business and on Wednesday morning I was in my shop when the gang leader with a young woman brought necklace to me to buy. The lady told me that she lost her mother and that they want to do her burial and that they need money for the burial.

“After we finished doing the business and I gave them the money, two days later police came and arrested me. They asked me where the necklace was and that I should provide it for them and I did as they said. I bought the necklace at the rate of N600, 000,” he said.

Earlier, police spokesperson in the state, Loveth Odah, said five out of the six members of the gang were arrested.

She said the six-member gang led by Chinonso Desmond first attacked one Ikwuobe Odeh Samuel at his residence, No 10 Ofor Street Abakaliki.

She said they kidnapped him and his friend in his Toyota Highlander Jeep with Reg No. MKD 421 TS and took him to a nearby bush at Azugwu Onuebonyi in Abakaliki on May 21.

“After robbing them of some cash and other valuables including phones and laptops, the gang blindfolded them and kept them hostage after which they proceeded with the said Highlander jeep to kidnap Mr Oke,” she said.

According to the police spokesperson, one hour later at about 11 p.m, the gang members double-crossed Mr Oke as he left his hotel located at 95 Nnorom Street, Abakaliki; kidnapped him in his Honda car and took him to Onuebonyi River.

“Once there, they proceeded to rob him of a cash sum of N200,000 in his possession and other valuables such as gold necklace, hand bangle, belt, ring, shoe, wrist watch, hand bag, iphpone8plus and Samsung galaxy edge plus phones.”

Mrs Odah said the kidnappers then took the victim’s phone and transferred large sums of money to their respective bank accounts which amounted to N5.2million.

After robbing him, Mr Monday Udoka was shot and pushed into the river by the gang believing that he is dead while the first victim,Mr Samuel and friend were released unhurt.”

Mrs Odah said after receiving report of the kidnap, the police commenced investigation which led operatives to Enugu/Nsukka where five of the gang members were arrested.

Premium Times had earlier reported how the 32-year old Mr Omah was killed in cult clashes in the area.

Parading the suspects at the State Headquarters of the Police in Abakaliki, Mrs Odah said the suspects also robbed other innocent citizens of their belongings.

“One English Barretta pistol, one live cartridge, 10 live ammunition, one Volkswagen car, one long machete and substance suspected to be charm were recovered from them,” she told journalists.

She added that the suspects had also confessed to the crime.

Mrs Odah, an Assistant Superintendent of Police, further said the police arrested one Awoke Ikechukwu, also known as ‘IK Dokpor’, a prime suspect in the robbery and murder of one Michael Nwodom at Afikpo street Abakaliki in July last year.

According to her, the police recovered from the suspect one Barreta pistol with 10 lives 9mm ammunition and the mobile phone set of the victim.

She said the police also arrested one Oken Chimezie with one revolver pistol in his tricycle along G-hostel, Abakaliki while the duo of Ifeanyi Onyibe and Nweke Joshua were arrested for unlawful possession of a revolver pistol, one axe and a machete at Ezillo junction in Ishielu local government area.

“One Nwabuike Nnabuike was arrested along No. 2 Nsugbe Avenue Abakaliki who robbed one Ugochi Chukwu of her phone valued at N12,000 with constructed locally made pistol. The said gun and phone were recovered from him,” Mrs Odah said.

“In the same vein, on 23rd March, One Friday Chibuike, 21years, was arrested at Umuoru Obode road Ezzangbo who robbed Igboke Ngozi and her son at gunpoint. One locally made single barrel shortgun with one live cartridge, four 6mm live ammunition and one dagger were recovered from him,” she added.