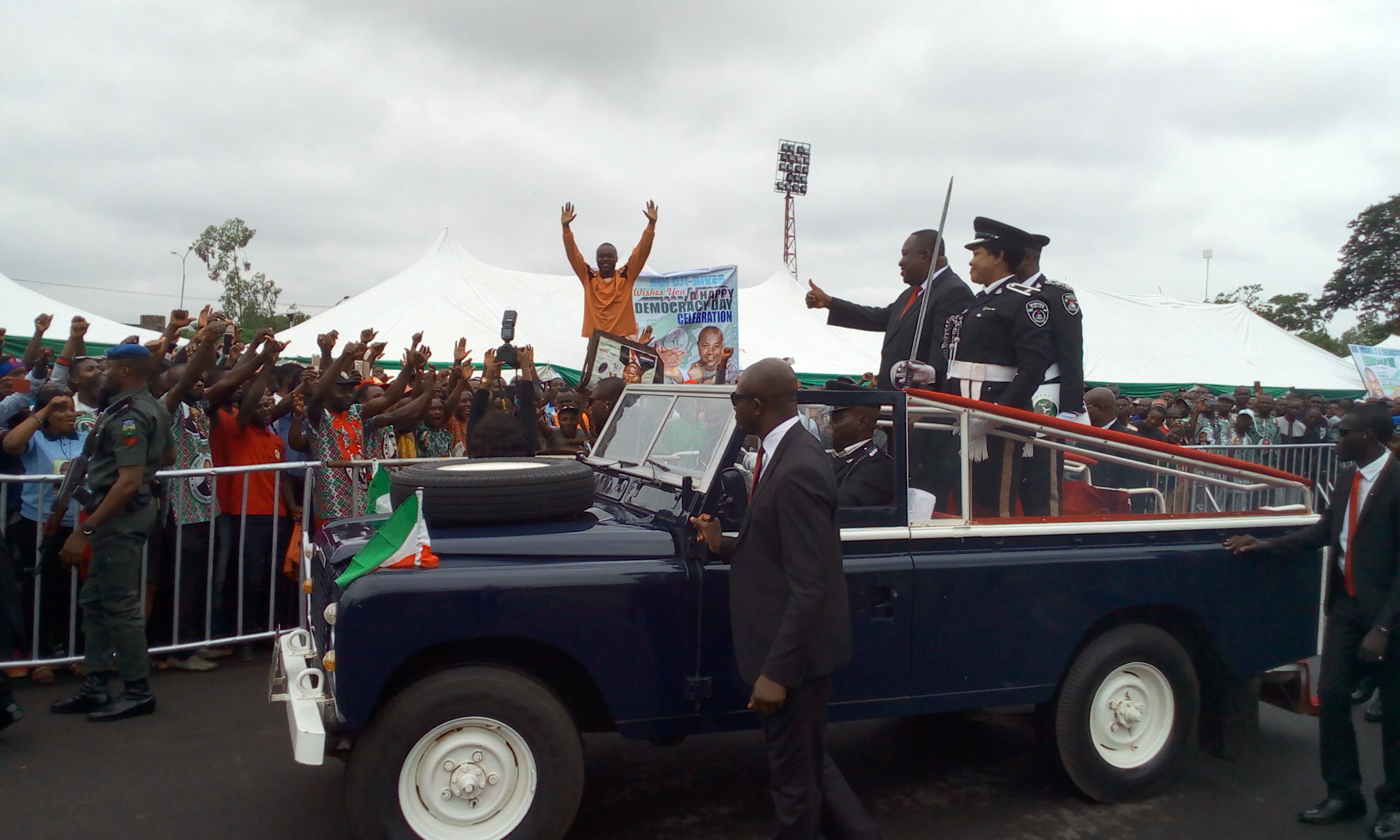 It was a festival of gratitude and jubilation at the event marking the 2018 Democracy Day celebration in Enugu State on Tuesday as Governor Ifeanyi Ugwuanyi reassured people of the state of his administration’s resolve to continue to put them first.

Addressing the people of Enugu State at the colourful and well attended ceremony, Governor Ugwuanyi listed the numerous achievements his administration has recorded so far in all spheres of development to improve their living standard as the true heroes of democracy.

The governor’s address was titled in “A festival of gratitude.”

Mr. Ugwuanyi, who was overwhelmed by the large turnout of leaders and people of the state at the event , expressed gratitude to them, adding that it was also “a day of gratitude to God Almighty from whom all blessings flow and whose ceaseless grace has continued to sustain and give us a lifting up in the midst of the current economic realities”.

The governor congratulated President Muhammadu Buhari, his deputy, Yemi Osinbajo; the leadership and members of the National Assembly; the Chief Justice of Nigeria and the entire judiciary; fellow governors, among others on the nation’s 19th Democracy Day celebration and third anniversary of the present administration.

The governor stated that his administration has made tremendous progress in the past three years in spite of the challenges it was confronted with at inception in 2015 such as the “huge debts profile of the State breathing down our necks, huge salary and pension arrears confronting us in the midst of economic crunch and very depleted revenues from the centre occasioned by the fall in oil revenues.”

Dedicating the successes recorded so far by his administration to God, Governor Ugwuanyi disclosed that the government also employed utmost determination, aggressive revenue drive and prudent management of available resources to render good governance in the state.

He reassured residents of the state and teeming supporters that his administration will continue to honour God and run a focused, developmental and conscience-driven leadership, reaffirming his commitment to consolidate on rural development to enhance participatory democracy.

Governor Ugwuanyi further stated that his administration in keeping with the constitution of the country has made frantic efforts towards the security and welfare of the people of the state, saying: “To the glory of God, Enugu is now rated as one of the most peaceful and secure states across the Federation. We are most grateful to God, the good people of Enugu State, the church, and the security agencies for making this possible”.

According to the governor, “we partnered and supported the security agencies to build their capacities to rise to the challenges of securing a modern society. We launched the Enugu State Security/Neigbourhood Watch Endowment Fund and provided support in the forms of vehicles and equipment to complement the efforts of the security agencies”.

On investment drive, Governor Ugwuanyi said “the peace and security in Enugu State have transformed the State into a popular destination for investments and tourism”, disclosing that the state’s Investment Summit,Oganiru Enugu, organized by his administration unveiled the potentials and economic opportunities in the state to the world.

“Both foreign and local investors keep coming”, he said, adding that “in addition to the ENPOWER Free Trade Zone, which was envisioned as a world class in-land technology, industrial, and business hub and licensed by the FG in December 2015, we have also set up the Lion Industrial Park, 9th Mile Corner, to create fresh economic and industrialization opportunities as promised in our inaugural address”.

He added that the government conceptualized “The One Community One Project (OCOP)” with the sum of N10 million per community to make all the communities in the state “the chief drivers of their infrastructural development priorities”. “This is already yielding fruits” as “not only have communities received the initial installment of N5 million, I have also had the honour and pleasure to commission some of the projects”.

The governor also disclosed that the five new Ultra Modern Fire Service stations his administration is constructing across the state, after 56 years such projects were built in the state, the Eastern Region, are nearing completion, with that of Ogrute in Igbo Eze North L.G.A completed and inaugurated in a record time.

On education, he stated that the government has worked to restore confidence in public educational institutions and has embarked on massive renovation, rehabilitation, and re-equipment of primary and secondary school buildings to make them friendly and safe for learning.

He equally stated that his administration has invested heavily in the recruitment of primary and secondary school teachers and has also regularized the appointment of volunteer teachers declaring that the employment of more teachers in the state continues because of “the premium we place on this all-important sector”.

Gov. Ugwuanyi said that the government has paid close attention and carried out reforms at the state’s tertiary education, revealing that the Institute of Management and Technology (IMT) “is set to hold its convocation for the first time in nearly 11 years”.

The governor maintained that his administration adopted a “multi-strata empowerment approach” that touches the lives of traders, market women, the youth, urban and rural dwellers alike, adding that it has remained consistent with its promise to pay civil servants on or before the 23rd of every month and pay the pensioners.

He also added that through the recent launch of “the Enugu Clean Team Project”, 1,000 youths were gainfully employed to clean up the state, revealing that “the State Executive Council has also approved the recruitment of an additional 1,000 youth for the Initiative”, among other numerous achievements.

“As we embark on the fourth lap of this glorious and God-given tenure, rest assured that we will never let you down. With God ordering our steps, we will continue to put you first, fulfilling our promises, and ensuring that the common good remains our watchword.

“We will continue to deliver democracy dividends to you. We will also continue to count on your prayers, support, and cooperation as we build an Enugu State of our dreams. As you return to your various communities, take home this message of hope and assurance that together, we will get to the Promised Land as Enugu remains firmly in the hands of God”, Gov. Ugwuanyi pledged.