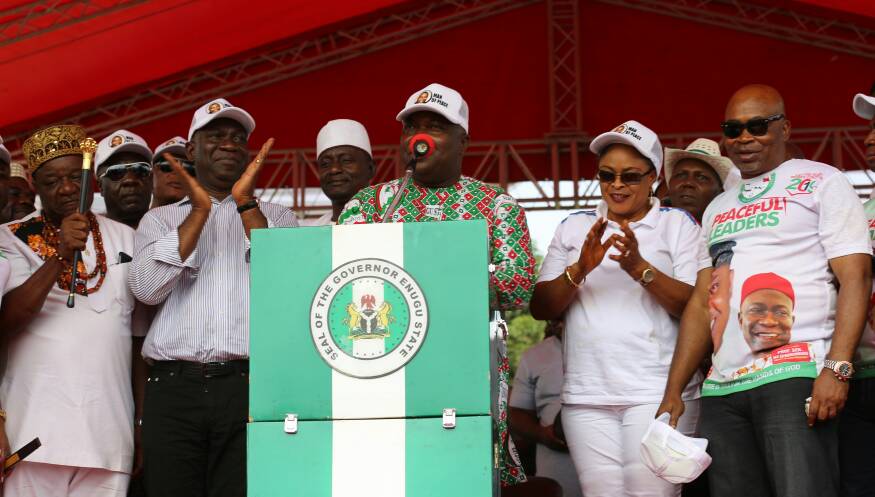 The Deputy Senate President, Ike Ekweremadu, on Saturday, hailed the Enugu State governor, Ifeanyi Ugwanyi, saying he brought permanent peace to the state, as well as among the opposing parties in the state.

According to a statement signed by his Special Adviser on Media, Uche Anichukwu, the lawmaker said this at the Enugu West Peoples Democratic Party (PDP) Zonal Peace Rally, which held at Udi Abia, Udi Local Government Area of the State on Saturday.

Mr Ekweremadu praised the peaceful dispositions and leadership qualities of the governor as he explained that the years preceding general elections in Enugu State had always been characterised by political tension.

He said Mr Ugwanyi had ensured that political peace, which he engendered upon his election, had endured till date.

The Deputy Senate President recalled how the years 2002, 2006, 2010 and 2014 (which were years that preceded general elections), were filled with political crisis “that almost consumed everybody” but Enugu survived.

“This is 2018. There will be elections in Enugu next year, but everywhere is peaceful in this state because we have a governor, who has brought permanent peace to the state.

“God has been very faithful and kind to our State, but we will not take it for granted. That is why we came together today to thank God and celebrate our governor, who has made this possible,” he added.

In his remark, the governor also hailed Mr Ekweremadu for showing leadership and support at all times, which he explained, “has contributed immensely to the peace and development in the State.”

He also appreciated the people of Enugu West for the good example they had shown, urging other senatorial districts to emulate them.

While calling for prayers for the continued peace and development in the state, Mr Ugwuanyi assured that he would always lead with a sense of peace and justice.