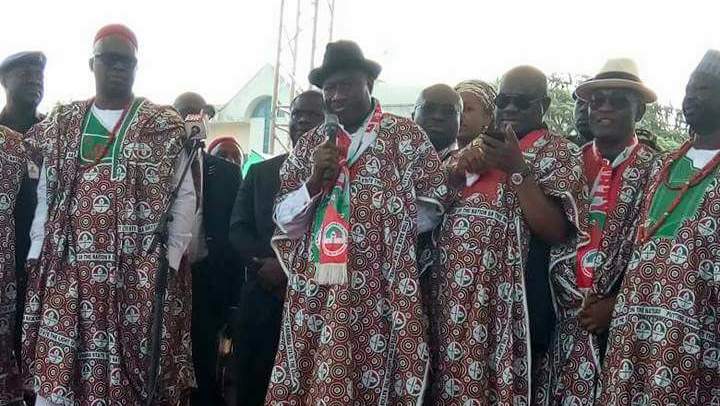 A former President, Goodluck Jonathan; Governors of Rivers and Ekiti states, Nyesom Wike and Ayodele Fayose; among others visited Anambra State on Thursday for the grand finale campaign for Oseloka Obaze.

Mr. Jonathan was also accompanied by the governors of Delta, Abia, Taraba, and Gombe states as well as the former governor of the Anambra State, Peter Obi, at the rally held at Onitsha, the commercial nerve of the state.

According to Sun Newspaper, the former president said Anambra has been a PDP stronghold and that return of the party to the state in tomorrow’s election would birth a new era that will end marginalisation of the state in Nigeria and by extension, the South-east zone of the country.

Mr. Jonathan urged Anambra citizens to vote Mr. Obaze as he was carefully selected to steer the state forward.

We don’t want any situation Igbo will complain of marginalisation, it will depend on people you send there and then governors and people we send there. We need somebody that will encourage the enterprise and business that have the connection overseas to attract foreign partners to the state and that person is Obaze,” Mr. Jonathan said.

Mr. Obi, the former governor, described incumbent willie Obiano as a mistake that needs to be voted out.

“Obiano is a mistake and bad market we made which must correct by voting Obaze on Saturday election. We should ask him what happened to N75 billion I left in the state account and N192 (billion) allocation. Obiano said there is no need of saving money, he sold Anambra State house in Lagos State, let’s vote him out,” Mr. Obi stated.

INTERVIEW: I Have a Hopeful Outlook On Nigeria’s Future – Peggy Dulany

INTERVIEW: I Have a Hopeful Outlook On Nigeria’s Future – Peggy Dulany

ANALYSIS: Russia 2018: Why Nigeria is now in trouble, By Adegbenro Adebanjo