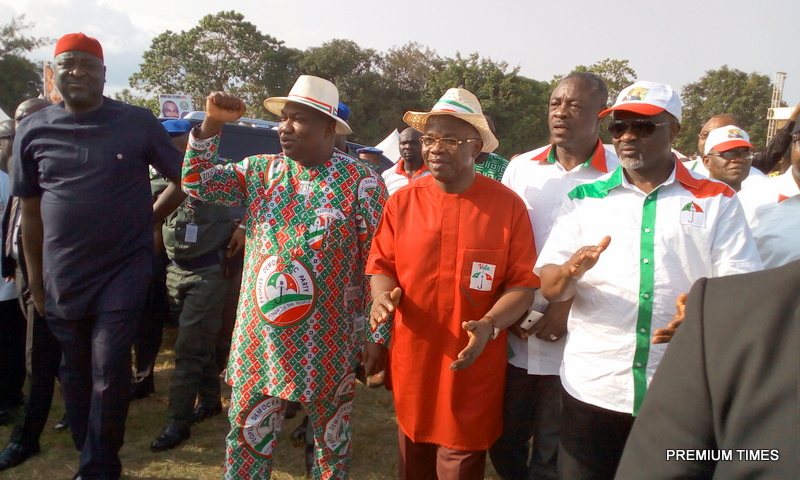 Ahead of the November 4 Local Government Elections in Enugu State, Governor Ifeanyi Ugwuanyi on Wednesday led leaders of the Peoples Democratic Party, PDP, in the state to flag off the party’s campaign in the state, starting from Oji River and Udi Local Government Areas.

The events, which witnessed a mass turnout of enthusiastic party members and teeming supporters, saw Mr. Ugwuanyi appealing to them to eschew any form of bickering and divisive rhetoric during the campaign and the elections for the party to enjoy a landslide victory.

The governor also urged party faithful and supporters to go to every household in the state to canvass for votes, assuring them that the people will be receptive to their message, as they are already at home with the PDP and its government in the state.

Mr. Ugwuanyi while presenting flags to the party’s chairmanship and councillorship candidates, entrusted their candidacy to the hands of God and urged the people of the state to come out en masse on November 4 to vote for candidates of the PDP in all the 17 local government areas and 260 electoral wards of the state.

He preached peace, harmony and a united Enugu State, stressing that the state is essentially one family, admired for its inclusive style of leadership.

Also speaking, the State Chairman of the PDP, Augustine Nnamani, thanked party leaders and supporters for coming out in large numbers to grace the campaign, saying that it was a clear indication that the party is popular and acceptable in the state.

The state party chairman also applauded Mr. Ugwuanyi for entrenching peace and good governance in the state with the meagre resources at his disposal, saying that the unprecedented achievements recorded and the governor’s uncommon leadership style, have enhanced the PDP’s chances of winning all the elective positions in the forthcoming council elections.

He also appealed to the people of the state to vote for candidates of the PDP, for the party to continue to deliver dividends of democracy for the good of all.

The campaign had in attendance members of National and State Assemblies; traditional rulers, PDP support groups; and other stakeholders including the three former chairmen of the party, namely: Charles Egumgbe, Vita Abba and Ikeje Asogwa.

Mr. Ugwuanyi at the Udi Local Government Area rally, tagged “Operation Udi Storm” was honoured with a chieftaincy tittle for his works in the council area and the entire state at large.