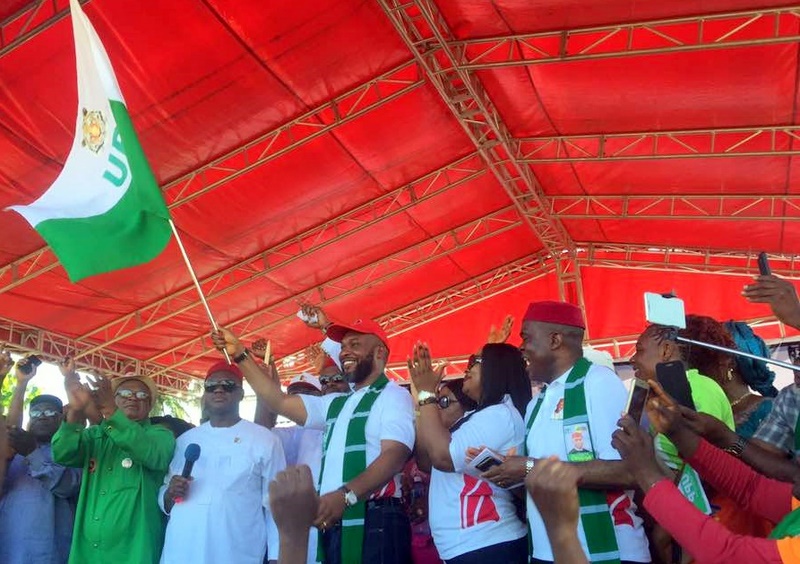 Igbos are not Terrorists

The candidate of the United Progressives Party for the coming Anambra governorship election, Osita Chidoka, on Saturday formally flagged off his campaign.

IPOB, the pro-Biafran separatist group, is calling for an independent country of Biafra, made up of ethnic Igbos.

The group was branded a terror group by the federal government last month after clashes occurred between its members and security operatives.

On Saturday, Mr. Chidoka also called for the creation of another state in the south-east, saying he would champion such if elected Anambra governor on November 18.

Read his full speech below.

Ladies and gentlemen, my brothers and sisters,

We are gathered here today in the historic city of Amorka to launch a governorship campaign. Many people may be wondering why we chose this ground for this launch. This ground is historic by its significant position as the last standing territory at a great time in the history of a great people and their unconquered resilience in the face of all odds.

This is the home of the famous Uli Airport – an airport, which at some historic point, was the only link between Biafra land and the rest of the world. It remains a loud testimony and tribute to the Igbo ingenuity, innovation and the resilience for which we are known all over the world.

Uli airport remains one of our finest hours when in the midst of bombardments and gunfire; of injury, pain and death; we held forth and sustained an airport that was our support and our access to the whole world even in the midst of battle.

This blessed ground was our avenue for relief for our dying children and the very home of that fearless efforts to finish a war for which many of our finest gallantly laid down their lives for us all.

Today, we stand to pay tribute to all those who died in the quest to build a nation out of the regions of Nigeria; we pay tribute to their courage, their valour and audacity of identity and self-expression.

Gathering at this ruin to launch this governorship campaign signals the starts of a new engagement; a new dream nurtured by the essentials of our inner consciousness as a people in Nigeria.

As we launch our campaign, we lift the “isi agu”, the very Igbo symbol of our courage, pride and undying consciousness as well as our composure and resilience as a people even in the face of adversity.

It is therefore symbolic that the isi agu is also the emblem of our great party, the United Progressive Party (UPP), which today is the political vehicle for our new consciousness and engagement as a people in Nigeria and which also has in its manifesto, the quest and right to self-determination

Upon this platform and out of the ruin of the Uli airport, we lift a new song; a new banner that galvanizes our collective energy in the renewed quest for a great nation where all are free, where no man is oppressed, subjugated or branded and where there is equality and liberty of self-expression.

In March 2015, our country went to an election that divided us greatly. Today the nation is still greatly divided, and almost back to her primordial lines. Our country is troubled; our people are afraid; our future is uncertain.

We cannot build a great nation without unity at home. We cannot be a nation where people are hated, branded and then hounded and ostracized. We stand here to declare that there are no terrorists in our state; there are no terrorists in our region and we do not feel terrorized as a people. Indeed, without further argument, we do not believe that those who are asking for a restructured Nigeria or even for dismemberment of Nigeria are terrorists. No! They are not.

How can Igbos be terrorists? We have always actively participated in the Nigerian project, yet in this country, we have suffered since June 1945 British inspired ethnic violence, nineteen incidents of pogroms, wanton killings, and violence against our people living across the country.

Even at that, we have continued to endure. We have continued, like no other group, to vote with our feet in support of a United Nigeria. We live, invest and raise families across the length and breadth of our country.

We are only asking for a fairer union; a union founded on justice, equity and fairness. A union where Emeka living and schooling in Kebbi, will not be judged as an Anambra indigenes at the point of admission. The standard for Ahmed, who grew and schooled in Onitsha, should not be lowered because he is from Kebbi. We will advocate the abolishing of State of origin as a category of identification and replace with state of residence.

On May 29 2015 the President swore to the oath of office of President of Nigeria, where he swore that He “will do right to all manner of people, according to law, without fear or favour, affection or ill-will;” Mr. President now is the time to embrace history, heal the land. Become the father of the new Nigeria. History beckons. The alternative to peaceful engagement is too costly

We cannot live in a country where people are repressed and citizens constantly misunderstand and mistrust one another. No! That is not the way to go. We need new understanding and peace and I, Osita Chidoka, today steps forth to appeal to ndị Anambra to work with me to not only rebuild our state but also re-engage the Nigerian state.

While we salute all those who through one legitimate way or the other had pursued the struggle, we state today that we are stepping into a new frontier. The Igbo voice against marginalization and injustice will not be achieved on the streets. It will rather be won with a determined engagement of our institutions of government and with other Nigerians who feel aggrieved to redefine the meaning of Nigeria and remove the inequalities that have fanned the embers of discord, and restructure our nation along the lines of justice, equality and fairness.

To this end, my election as governor of Anambra State, will start off with a single agenda; an agenda to secure a new state for the southeast region to bridge the disparity we face. We will immediately, upon inauguration, in line with S. 8 (1) of the 1999 constitution get our National Assembly members from Anambra state, our elected House of Assembly members, and local government chairmen to sign a request to the National Assembly asking for a referendum for the sixth Southeast state.

We will vigorously engage our friends from other states in the National Assembly and other states House of Assembly for a new state. Nigeria must take a decision on the issue of additional state for the southeast before the end of life of the 8thAssembly and the 2019 election.

I will pursue this agenda with all dedication and drive; once it is accomplished, I will be ready for another election. I will not allow the love of office to obstruct our greater good. This is my cardinal covenant with Ndi Anambra.

I also believe that our dear state, Anambra is not achieving its destiny as a state. This state has some of the most educated minds across Nigeria and some of the most natural capabilities that would have turned it into a knowledge, manufacturing and logistics hub of West Africa, if we have the right type of leadership.

My goal as governor is to marshal and spur the God-given ingenuity of our people to create wealth and make Anambra state a self-sufficient territory, a model of merit, equity and justice, while connecting our commerce and industry to the whole world.

We have worked out a strategic blueprint with timelines with a four step pyramid of Knowledge, Vision, Execution and Sustainability (KNVES) to make Anambra State work for everybody. Our plan will be underpinned by the Igbo values of Uche, Uchu na Egwu Chukwu. Our plan will be anchored on a program philosophy of monitor, Measure and Improve.

We will run a transparent and community based and all-inclusive system where institutions of government in all critical sectors run efficiently for the desired quality of life for all citizens and residents. Anambra state under my watch will be a model state, a home for all where the forgotten, the poor and the disadvantaged are reintroduced into our society by providing them the basic amenities. This is my promise and I will stand by it.

I stand on the platform of the UPP, a party that has given itself the clear mission to stand by the people and serve only their interest. UPP is the hope of the masses and we will ensure that its mandate of ensuring that all citizens have equal access to opportunity and resources in the state is fully achieved.

Finally, my dear brothers and sister; Ndi Anambra and Igbos, today, I step forward confident in the fact that in all, I have God and the good people of Anambra state beside and behind me. My aspiration to lead our dear state is a product of enduring prayers, abiding faith in God, painstaking planning, extensive mobilization, consultations and bonding among our people without barriers.

On that note I call on all ndi Anambra to rise up today and lift with me the banner of our pride- the banner of ‘isi agu’, and march shoulder to shoulder with this heroic step from the ruins of Uli airport to a glorious future for our state.

I thank you for listening.