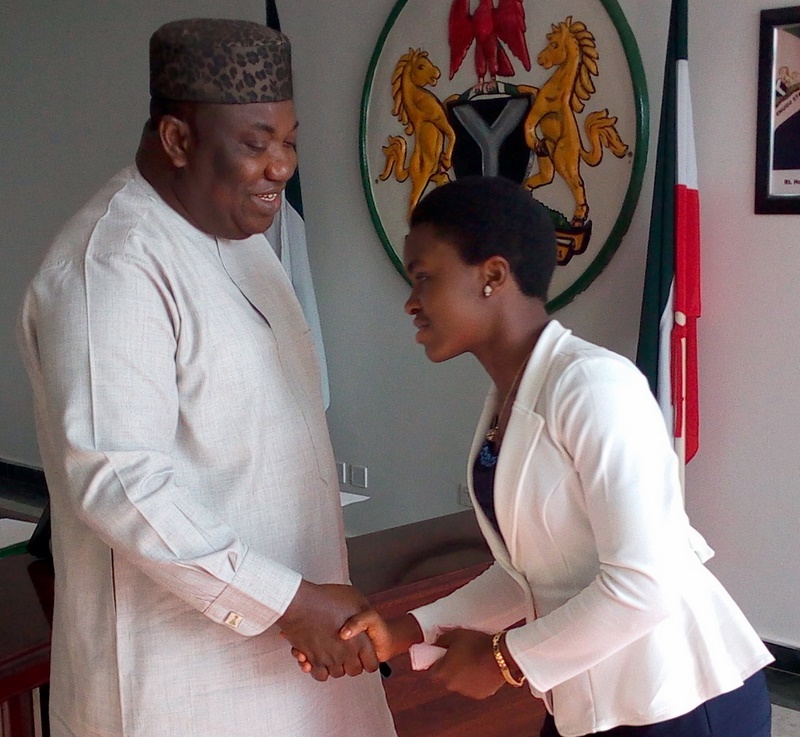 Enugu WAEC StudentGovernor Ifeanyi Ugwuanyi of Enugu State congratulating Miss Cynthia Ali, a student who had A1 in all her nine WAEC subjects, after the governor awarded her a first degree scholarship to any Nigerian university of her choice in Government House, Enugu, yesterday.

The Enugu State Government has offered scholarship up to first degree level in any Nigerian university to the best graduating student of Shalom Academy Nsukka in 2017, Cynthia Ali, who scored A1 in all the nine subjects she sat for in the West African Examinations Council (WAEC) exam.

The state government also resolved to present the student with a certificate of honour in further recognition of her outstanding academic performance.

Announcing the scholarship shortly after the student was presented before members of the State Executive Council (EXCO) at the hallowed chambers of the council for commendation, the state Commissioner for Education, Uchenna Eze, who spoke on behalf of the council, expressed delight at the impressive record.

The Education Commissioner, who briefed journalists in company of the Commissioner for Information, Ogbuagu Anikwe, and the Special Adviser on Education, Sam Ugwu, alongside the parents and management of the school, added that Miss Cynthia has made the state proud and deserves the recognition and support of the state government.

He stated that the recognition was also a means of motivation and to encourage others to work hard to excel in their academic endeavours and continue to make their families and state proud.

The government charged her to remain committed to the pursuit of academic excellence, describing her as “a role model”.

Miss Cynthia, an 18-year-old indigene of Enugu State hails from Umuagama, Enugu Ezike in Igbo Eze North Local Government Area, has one of the best WAEC results in the state, South East geo-political zone and the country at large.

She has applied to read Medicine and Surgery in the University of Nigeria Nsukka, UNN, and has been consistent with her enviable status as the best student of Shalom Academy, Nsukka from JSS1 to SSS3.

The student has also been honoured on two occasions with the Certificate of Merit by Mathematical Association of Nigeria (MAN), Enugu State Chapter (2016 and 2017).

In her response, Miss Cynthia dedicated the success to God and thanked Governor Ifeanyi Ugwuanyi of Enugu State for the scholarship and the rare honour to be presented before the hallowed chambers of the executive council.

She described the governor as a leader with a good heart whose passion for education is remarkable, promising to continue to make the state proud.

In her remark, the proprietor of the school, Vicky Onu, commended the governor and other members of the executive council for the honour and support extended to Miss Cynthia to further her education, pointing out that she is a product of discipline, diligence, hard work and fear of God.

She added that the gesture will encourage other students to work hard to achieve their aims in life.