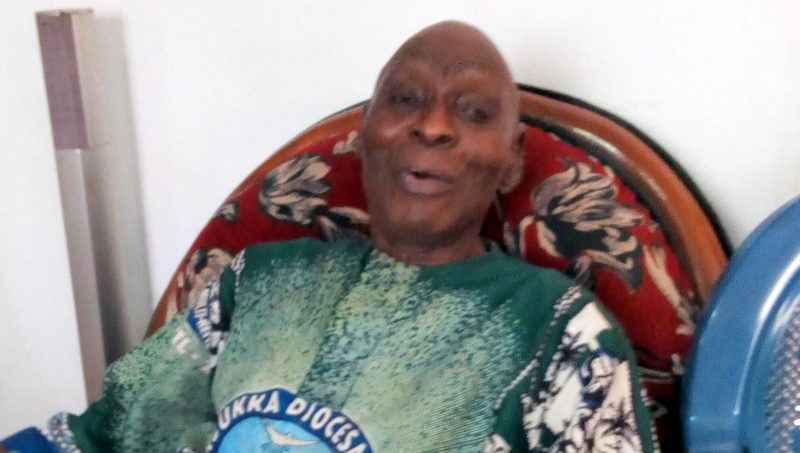 Mr Eya relaxing at his home

A retired university professor and former scribe of Ohaneze Ndigbo, the Igbo socio-cultural organisation, Nduka Eya, has narrated his ordeal during the three days he was held by kidnappers in Enugu State, South-east Nigeria.

The octogenarian, who was kidnapped from his home in Enugu on Thursday, was rescued on Saturday morning after a police team stormed the den of the kidnappers at a forest in Emene, near Enugu.

Speaking with PREMIUM TIMES shortly after he regained his freedom, Mr. Eya said he tried to counsel the kidnappers to repent from what they were doing but got more beatings.

When our correspondent visited the home of Mr. Eya shortly after his release, it was filled with sympathisers and well-wishers rejoicing with the family over his rescue.

In high spirit, he regaled the audience with the account of how he was kidnapped at about 9.30 p.m. when he was about to take his coffee before going to bed, and the ordeal he went through for three days before his rescue.

He said the kidnappers apparently working with his driver, came into the compound through the main gate. He said the gateman had wanted to bolt the gate but was told by the driver not to as they were expecting some visitors.

According to him, three of the kidnappers then walked into his main building through the kitchen door with the driver who they were beating to give the impression that he was not part of the plot.

He said when they got in the kidnappers pointed a gun at him and forced him to follow them to his car which they asked his driver (who usually keeps the car key) to drive to Emene, before one of the kidnappers took over from him and meandered into the forest.

Mr. Eya said he later discovered in the forest that the number of the kidnappers increased to between 14 and 20, and that they moved him from one location to another.

He said the hoodlums demanded N25 million initially until the ransom was negotiated down to two million, as he kept reminding them that he was a poor retiree and had no such money.

“I was rescued by the police. My driver was part of it; they said he brought the business,” Mr. Eya told his crowd of sympathisers.

“I can tell you, the Police when they want to work, they work. After all the rigmarole, I was tortured, I was beaten but I just said ‘why do you strike me?’

“The driver was there, they beat him too but I don’t know if it is the same type of beating they gave me.

“But one funny thing is that for three days I was blindfolded, but they didn’t blindfold the driver. He was the driver who took us out to the bush, he was driving. And this is a young man, he had no job, I just employed him.”

Speaking on the development, state police spokesperson, Ebere Amaraizu, said Mr. Eya was rescued by operatives of the anti-kidnap Unit of the Enugu State Police Command “through intelligence information and coordinated operation.”

“The police in the early hours of 5/8/17 rescued Prof Nduka Eya who was allegedly abducted on 3/8/17 at Ezillo Street Independence Layout Enugu.

“He was rescued unhurt by the operatives following an operation carried out in a forest along Enugu/Abakiliki Expressway in which one suspect identified as one Amadi was arrested.

“Recovered from him is a locally made gun and he is helping the operatives in their investigations.

“Meanwhile, the rescued victim has re-united with the family while manhunt on other suspects is intensified.

“It could be recalled that the state command has assured that measures have been put in place to rescue the victim as well as arresting culprits following the report about his abduction on 3/8/17,” a statement by the spokesperson said.