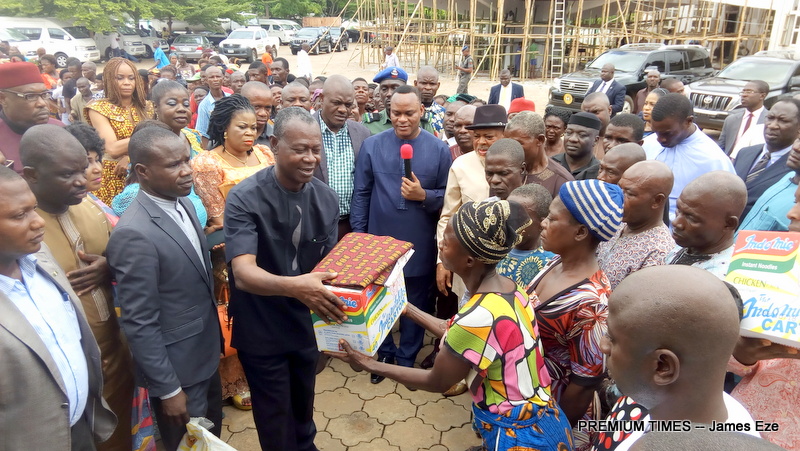 Governor David Umahi, represented by his deputy, Dr. Eric Kelechi Igwe(with mic) supervising the distribution of food and other items to the victims of the war torn Ogiri in Afikpo South council area of the state.

The Ebonyi state Governor, David Umahi, on Monday distributed relief materials worth N20 million to Internally Displaced Persons in the intra-communal dispute between the people of Ogiri and Okporojo, Afikpo South local government areas of the state.

The two neighbouring communities have been locked in land dispute which claimed the lives of over 40 persons when fighting broke out in May this year with properties including houses worth millions of naira destroyed.

The relief materials donated by Mr Umahi include cartons of noodles, bags of rice, cartons or wrappers, sleeping mattresses among others.

In addition to the relief materials, the government also gave each household affected in the crisis N100,000 to the over 121 households.

Handing over the relief materials to the IDPs at government house, Abakaliki, Mr. Umahi, represented by his deputy Kelechi Igwe, called on the over 130 communities in the state to live in peace.

He said the distribution of the relief materials will be the last time the government will be intervening in communal crises.

He noted that the government was spending much in maintaining security of lives and property of the citizenry and warned that it will not tolerate anyone or community frustrating the government’s efforts.

“We are doing a lot to change the state for good and also touch lives. What security is taking from this government is so much that any other government would have collapsed,” Mr Umahi said.

The Chairman of the local government, Eni Chima who commended the government for the gesture, said normalcy has returned to the two warring communities.

Mr. Chima, who lamented over the condition of the affected village in terms of infrastructure and welfare, added that the present administration has begun the reconstruction of the houses in the area to ensure that the people were comfortable and repositioned to face the challenges ahead of them.

One of the victims, James Nkama, said they have been finding it difficult to live since the incident and appreciated government for the relief materials.

He also called the state government to assist them with farming implements to enable them to participate in this year’s farming season.