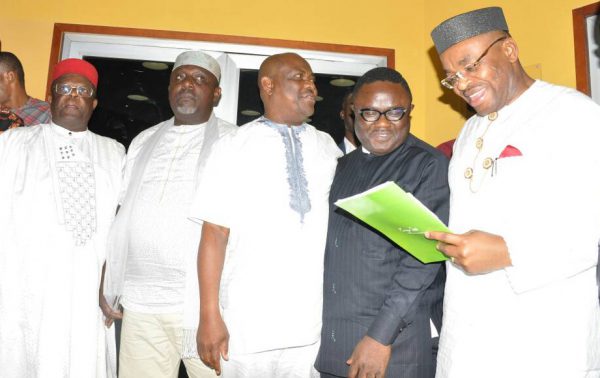 The forum at the end of its meeting in Enugu also agreed to pursue regional cooperation and integration for the economic benefit of the two regions.

The governors, after the three-hour meeting, also agreed on political cooperation.

The governors in their first meeting in the current dispensation, also resolved “to work together and realign as a people that share common heritage, culture and and affinities”.

They agreed to hold their next meeting in Port Harcourt, Rivers State on August 27, 2017.

The communique of the meeting was read by Governor Udom on behalf of the governors.

The meeting was attended by eight governors and a deputy governor; while two governors were absent.

Governors Ifeanyi Okowa and Godwin Obaseki of Delta and Edo states were absent at the meeting.

Analysis: Is APC defeat in Osun bye-election the beginning of its decline?