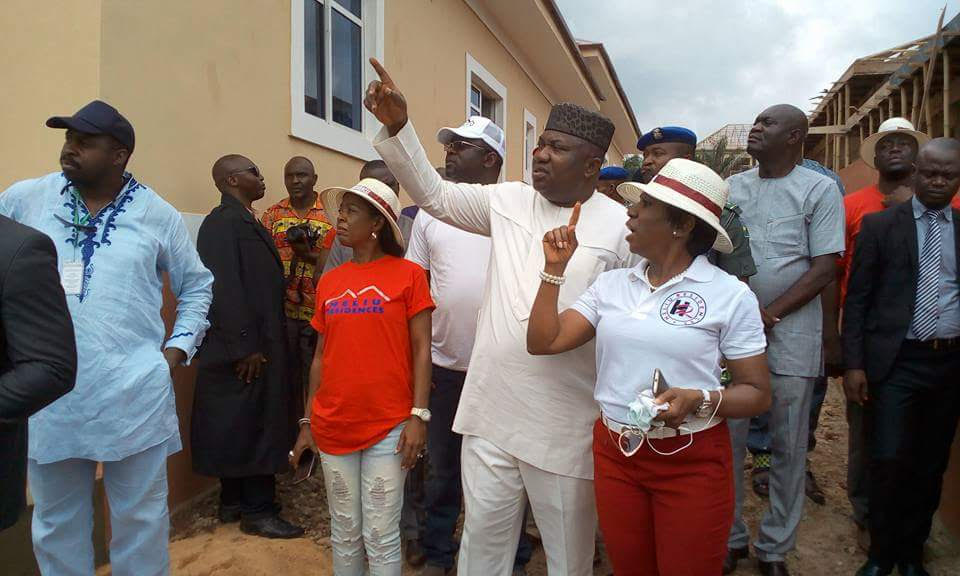 Governor Ugwuanyi during the inspection tour of an estate along the Enugu-Port Harcourt Expressway, Enugu

Governor Ifeanyi Ugwuanyi of Enugu State has reassured local and foreign investors that the State is ready and open for business for rapid development and socio-economic recovery.

Governor Ugwuanyi said his administration will eagerly welcome partners in every sphere of development to ensure that “the aspiration to build a more prosperous, peaceful and secure Enugu State will be fully and promptly actualized”.

The governor gave the assurance when he undertook an inspection tour of an estate along the Enugu-Port Harcourt Expressway, Enugu, being developed by the state government in partnership with a private firm, FIT Consult Limited, to provide befitting housing for potential residents of the state.

The visit, according to the governor, who went round the vast estate with the state’s Commissioner for Lands and Urban Development, Solomon Onah and the company’s officials, led by its Chief Executive Officer, Loretta Aniagolu, was to ascertain the extent of work on the estate with regard to the amenities and facilities being put in place to serve the needs of the people of the state.

After the inspection Governor Ugwuanyi expressed satisfaction with the level of “seriousness and commitment” exhibited by the state government’s partners towards the timely delivery of the project, saying he has no doubt that the venture will go a long way in his administration’s genuine efforts to addressing the housing needs of the people.

He added that the project “further underscores the usefulness of synergy and cooperation between government and the private sector in the quest for the rapid development of the state as well as the improvement of the lives of our people”.

While thanking Ms. Aniagolu and her team for their efforts, the governor used the opportunity to call on “other individuals and organizations in the private sector, both at home and abroad, to emulate this worthy example and also join hands with government to advance the frontiers of development in Enugu State”.