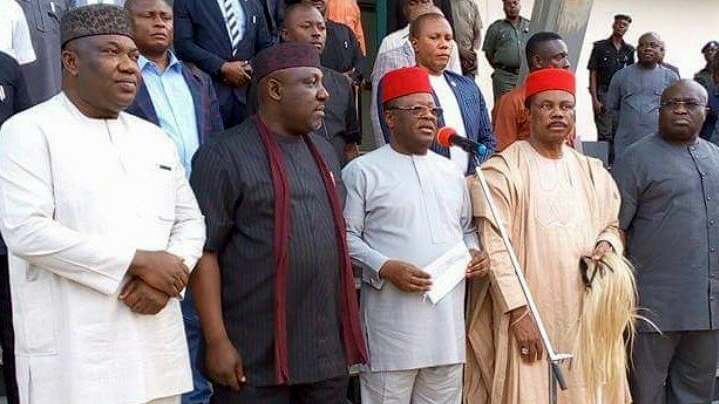 The governors of the five south-east states have urged Igbos leaving in Northern Nigeria to remain where they are and go about their activities without fear of being attacked. They assured them of their security despite the three months ultimatum given to them to leave the region by a Northern coalition.

The Chairman of the forum and Governor of Ebonyi State, David Umahi, gave the assurance on Thursday at a press briefing in Abakaliki.

He was reacting to a three months ultimatum issued by the Arewa Youth Consultative Forum, ACYF, a coalition of socio-political groups in northern Nigeria, to all Igbos in the 19 northern states to vacate the region.

The federal government and the Kaduna State government have since condemned the call, assuring of maximum security while Governor Nasir El-Rufai called for the arrest of the sponsors of the Arewa forum.

The governors of the 19 northern states on Wednesday also disowned the coalition of Arewa groups and assured Igbos of their safety in the region.

Describing the ultimatum as provocative and mischievous, Governor Umahi called on northern leaders to take actions that will counteract the intended plot of the youth, in other to ensure that the grim history of the past is not repeated.

“The ugly lessons of history are too grim to be stoked with carelessness. As leaders, we must exert the full measure of our powers and influence to forestall a repletion”

“We call on all Igbo sons and daughters resident in Northern Nigeria to go about their lawful daily activities without fear of intimidation, hindrance or molestation.”

Mr. Umahi further reiterated the commitment of the south-east governors to “the existence of a virile, united prosperous and progressive Federal Republic of Nigeria where Justice, fairness, equity, mutual respect and equality of opportunity to all citizens regardless of creed, ethnicity or gender will reign supreme under the inflexible rule of law”.

He also denied media reports that the governors held a meeting Wednesday night and resolved to send buses to evacuate Igbos in the north.

“The rumours being peddled on conventional and social media platforms that we, the governors of the south east have met and agreed to mobilise vehicles and cash for repatriation of Ndigbo resident in northern Nigeria must be disregarded, as they are nothing but tissues of lies.

“No amount of provocation would lead us to such precipitate an irresponsible action at this time. Those exploiting such vacuous tittle-tattle as a basis for divisive rhetoric in public spaces are simply playing juvenile politics and we urge them to cease and desist.”