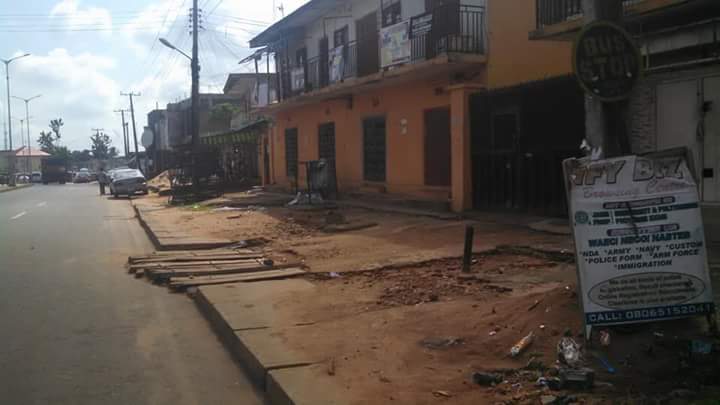 Residents stayed indoors across major cities in south-east Nigeria as residents complied with a sit-at-home exercise called by pro-Biafran groups, with most businesses including banks, markets and motor parks under lock.

The Indigenous People Of Biafra, IPOB, and the Movement for the Sovereign State of Biafra, MASSOB, had called for a sit-at-home today in the south-east to commemorate the declaration of Biafra by late Chukwuemeka Ojukwu some 50 years ago.

In Owerri, Enugu and Aba, markets including the popular Ariara main market in Aba were on total lockdown.

Other businesses including banks, fuel stations, and parks were also shut.

A resident of Owerri and Biafra supporter, Okemiri Samson, commended the people of the city for the compliance to the exercise.

“This is the highest compliance recorded in the city in recent times”, he noted.

In Enugu, there was also a massive compliance.

“I am at the Ogbete Main market in Enugu right now, it is under lock and key.

“My sisters went to school and their school was closed so they came back,” a resident, Raphael Onyekachi, told PREMIUM TIMES on phone.

In Port Harcourt, south-south Nigeria, there was also a high level of compliance according to a resident. Okezie Omeire.

Mr. Omeire advised commuters not to bother going to Aba or Umuahia as the road was closed.

“If you are going to Aba from Port Harcourt, please don’t even dare! You will not get to your destination. Everywhere is as dry and as silent as a graveyard. I just wasted my time and money this morning thinking I will make it to Umuahia this morning but guess what? I can’t even make it to Osisioma junction. I have to drive back to PH (Port Harcourt),” he said.

“Starting from Port Harcourt city, Rumuola, Rumuokwuta, Rumuokoro, Choba, Mile 1, Mile 2 and Mile 3 markets, Oil Mill and any busy place you can think of in PH, everywhere is scanty and deserted!”

The exercise, according to preliminary reports gathered by PREMIUM TIMES has so far been a huge success in Anambra State especially in Onitsha as shops, markets, banks and schools in the city remained closed.

According to a resident, John Okorie, “MASSOB called and we answered. All businesses in the city are closed including shops in the streets.”

Security officials were seen driving around the city to keep the peace. A similar situation was recorded in the state’s capital, Awka, and the second commercial city of Nnewi.

In Abakaliki, Ebonyi State, there was partial compliance, as the Abakpa Market, the city’s main market, was opened but most shops still remained closed at press time.

Many of the traders were seen gathered in front of their shops discussing the situation.

As they noticed that those who flouted the order and opened their shops were not being molested, many of them summoned courage and started opening their shops.

But the major private transporters in the city shut down their parks in compliance with the MASSOB and IPOB directives.

However, two banks, UBA and First Bank, opened their doors to customers while other banks remained shut leaving customers, who thronged to the banks, stranded.

Hours later, some other banks opened for business after observing the tight security mounted by police and other security agencies in the city to secure lives and prosperity.

But Ecobank and Diamond bank branches remained closed as at press time.

Also, police helicopters were seen hovering over most of the cities to provide aerial surveillance especially in Umuahia, the hometown of the IPOB leader, Nnamdi Kanu.

Mr. Kanu, who is facing charges of treasonable felony, was recently released on bail. While on bail, he has, however, restated his demand for a Biafran state, and urged support for Tuesday’s sit-at-home.

The Ohaneze Ndigbo, a foremost socio-cultural Igbo group, also said it saw nothing wrong in the sit-at-home directive, saying it was a peaceful means of protest.