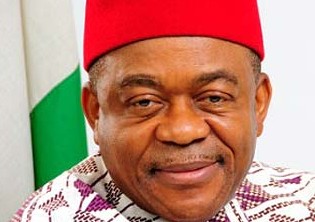 I will never teleguide my successor – Abia governor, Orji

Abia State Governor, Theodore Orji, has said he would not tele-guide his successor, Okezie Ikpeazu, but rather allow him use his discretion to run the state.

Governor Orji stated this at the Government House, Umuahia, when he received the Ukwa Peoples Assembly who paid him a courtesy visit.

He said once his tenure ends on the May 29, he is off from the state except on invitations.

He pointed out that he would not want to be seen as tele-guiding anybody.

The governor said having been elected by the people as their governor, his successor should be given a free hand to govern the state.

He pleaded with the people to cooperate with Mr. Ikpeazu for the rapid development of the state.

Governor Orji, who said that he ran an inclusive government in the state, stated that it was his belief that the next Governor should also follow in the same vein and have a listening ear.

“As the first Ukwa Ngwa governor he knows the enormous expectation of the people on him” Mr. Orji said of the governor-elect.

He said Mr. Ikpeazu will not disappoint the people.

The Abia State chief executive further assured the Ukwa people that their rights will come their way and urged them to remain patient and tolerant while using the opportunity to apologize to all those he might have offended in the course of his duties as Governor to forgive and forget.

Earlier, the leader of the delegation and former Senate President, Adolfus Wabara, said their visit was to thank the Governor for supporting fully the Ukwa Ngwa course.

He noted that without Mr. Orji, a governor of Ukwa Ngwa extraction would have been a mirage and urged him not to forget Ukwa people.

In their separate speeches,the Deputy Speaker, Abia State House of Assembly, Hon Asiforo Okere and Dame Victoria Akanwa, thanked the Governor for giving Ukwa people a sense of belonging and pleaded that they should be carried along in the new government.