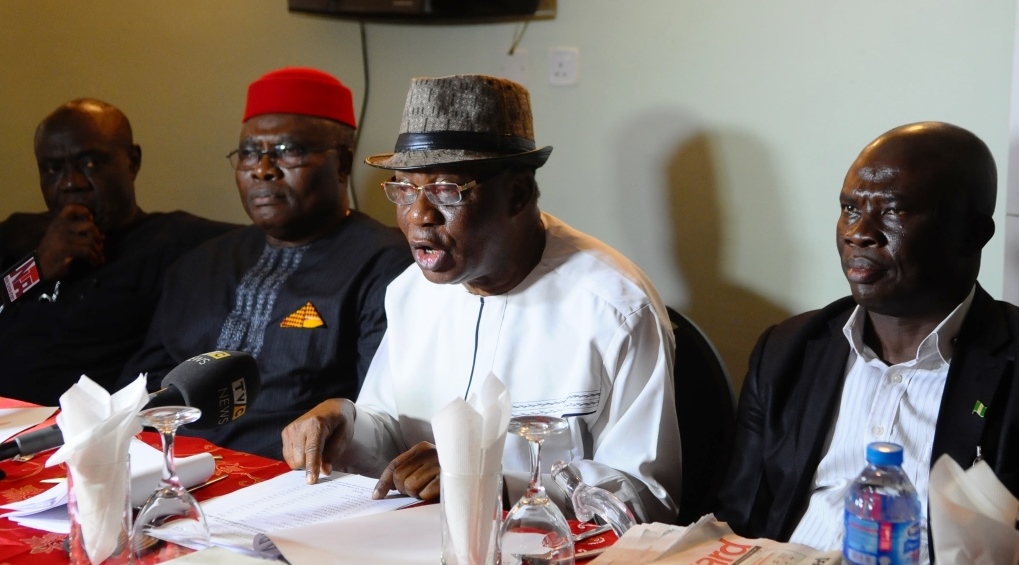 A group of Abia leaders, under the aegis of the Ukwa Ngwa Elders and Ukwa Ngwa Professionals, has decried what they called “the intransigence of the Independent National Electoral Commission officials in attempting to manipulate the outcome of the April 11, 2015 gubernatorial election in Abia State in favour of a candidate”.

Speaking at a media briefing in Lagos on Friday, the group questioned how a set of officials can conduct elections into two offices in one location, under the same circumstances and declare the result of one as fair and valid, and another inconclusive.

The leader of Ukwa Ngwa Elders, Emmanuel Adaelu, while calling on INEC Chairman, Attahiru Jega, to intervene and save Abia from a crisis that might damage the hard earned good reputation of the electoral umpire, alleged that some INEC officials have personal interests in the gubernatorial election and should not have been entrusted with adjudicating on a matter of personal interest to them for the sake of upholding the principles of natural justice.’

According to him, ‘the returning officer in the election, Prof Ozumba is the Vice Chancellor of the University of Nigeria, UNN, a university that just conferred an honorary doctorate degree on Alex Otti, the gubernatorial standard bearer for the All Progressive Grand Alliance, APGA, while the resident electoral officer, Prof Okoh is the same contestant’s cousin. INEC ought to have considered these peculiar relationships in appointing officials to manage the gubernatorial election in Abia State’.

The current situation, the community leaders insist, is threatening the peace in Abia State as youths are being restrained by the elders from demanding, forcefully, the release of the guber results conducted on April 11, 2015.

He maintained that his people have implicit confidence in the INEC and retain hopes that the umpire will do the right thing as had been done in other states with similar cases as Abia such as Rivers and Akwa Ibom.

“We have restrained the youths from taking the law into their hands by assuring them that INEC under Prof Jega will do the right thing and release the results as there is empirical evidence that demonstrated probity. This is our belief. We call on Prof Jega to do what is right and order the immediate release of the Abia gubernatorial result, knowing that the State House of Assembly election that held at the same time with the gubernatorial election has been released,” Mr. Adaelu said.

A prominent member of the group, and a former Senate President, Adolphus Wabara, said Abia people had decided to cry out for justice by filling a formal petition at INEC with the facts of the matter well laid out.

According to the petition, the group said, “From the results collated from the 17 Local Government Areas of the State, Dr Victor Ikpeazu of the People’s Democratic Party, PDP, is leading his closest rival, Dr Alex Otti of the All Progressive Grand Alliance, APGA with more than 83,000 votes.

“Surprisingly, two days after collation was concluded and after earlier moves of the key electoral officers to cancel the election failed, the Abia RO and REC, resorted to citing non-existent acts of violence and non-compliance with electoral laws, and announced the cancellation of results from a number of specified electoral units spread over some eight local government areas and with registered voters totaling some 177,000 votes altogether.

“The simple reason for doing this is to give an undue advantage to their preferred candidate, Dr Alex Otti of APGA in those carefully chosen electoral units where he has strength in the bid to frustrate the wishes of electorates in Abia State to elect their preferred candidate, Dr Victor Ikpeazu of PDP and rob him of his well deserved victory at the April 11, 2015 gubernatorial election at Abia State.”

The leaders enjoined Mr. Jega to listen to the yearnings of the people and order an immediate release of the result of the Abia guber election in the interest of equity.

The group accused Mr. Otti of plotting to scuttle the wishes of the Abia electorate so as to force himself on Abia State as governor.

Mr. Wabara added, “We are calling on the INEC Chairman, Prof Atahiru Jega to nip the incipient crisis in the bud by either ordering the immediate release of the result of the gubernatorial election conducted in Abia State on April 11, 2015 or redeploying the two principal officers, the Abia State Returning Officer, Prof. V. C. Ozumba and Resident Electoral Commissioner, Prof. Selina Okoh whose objectives are questionable.

“We cannot guarantee what will happen if the people feel convinced that the INEC under Prof Jega cannot let them democratically elect their governor.”

Another prominent member of the group, a former director-general of the National Directorate of Employment, Chukwu Wachukwu, said he was at home to cast his vote for the said elections, which he described as peaceful, free and fair.

He noted that “it is alarming that the electoral officer claimed she got a telephone call from Abuja to declare the election inconclusive. When Prof Jega denied placing such call, she switched position, placing her reason on the observation of an international electoral observer.”

Mr. Wachukwu added, “It is unacceptable to us and we will resist it with every known civil, legal and democratic process.”