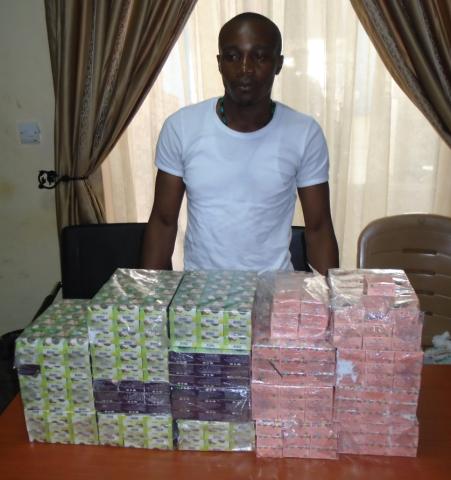 Drug trafficking on the rise at Enugu airport, NDLEA says

The National Drug Law Enforcement Agency has said that drug traffickers are now targeting the use of Enugu Airport since it was upgraded to international status.

Speaking after the arrest of two alleged traffickers smuggling 11.66 kilogramme of cocaine and heroin with a street value of N105 million, Ahmadu Giade, NDLEA’s chairman, said several attempts to smuggle drugs from East Africa, Brazil and other parts of the world through the Enugu airport had been foiled by the agency.

“The NDLEA is prepared to arrest drug traffickers and seize their drugs notwithstanding the mode of concealment,” Mr. Giade said.

“These arrests especially the suspect going to East Africa will definitely send a warning signal that the airports are not safe for drug trafficking. We are determined to always be on the alert and this arrest is a test of our vigilance because Bujumbura is not a regular route.”

Two businessmen, Christopher Nebe, 38, and Promise Iheme, 27, were arrested at the Akanu Ibiam International Airport, Enugu, for allegedly smuggling cocaine and heroin, according to Nsikak-Abasi Udoh, the NDLEA Commander at the Enugu airport.

“Christopher was found to have ingested 70 wraps of cocaine weighing 1.685kg on his way to Turkey while Iheme had 9.975kg of heroin hidden inside cosmetics on his journey from Bujumbura, Burundi,” Mr. Udoh said. “They were both arrested during screening of passengers on Ethiopian airline flights.”

During interrogation, according to the NDLEA, Mr. Nebe said that he would had been paid N1,000 if he had succeeded in smuggling the drugs.

“I sell ladies clothes but for some time my capital had been going down due to poor sales and family problem,” the NDLEA quoted Mr. Nebe as saying.

“A friend introduced me into drug trafficking and I was promised one million naira. That was how I decided to give it a trial. I had wanted to invest the money in my business.

“I feel sad that I was arrested. It was the one million naira that lured me into drug trafficking.”

Mr. Iheme, who was recruited in Tanzania by a suspected drug cartel in East Africa, told investigators that he smuggled drugs because he was stranded.

“I used to sell phone accessories before I left the country. I wanted to go to Malaysia in search of job opportunities but I was stranded in Tanzania,” Mr. Iheme said.

“That was how I met a Nigerian who gave me money and promised to assist me get back to Nigeria with money to start up my business. He later took me to Burundi where I was given 9.975kg of heroin in my luggage.”

Mr. Giade warned drug barons that the Agency will continue to resist the use of Nigeria as a hub for drug trafficking.