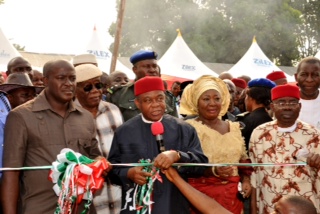 Abia State Governor, Thoedore Orji, has presented a budget estimate of N102.4 to the state House of Assembly for the 2015 fiscal year.

The figure represents a 12 per cent decrease from the 2014 budget outlay of N115.3 billion.

Delivering the budget he termed “Valedictory Budget” on the floor of the House, Governor Orji disclosed that the recurrent expenditure is N62.20 billion while the annual estimated capital expenditure is N40.18 billion.

Mr. OrjI said the decrease was occassioned by the global fall of crude oil price and premised on the framework of International Public Sector Accounting Standard (IPSAS) and structured along a Medium Term Expenditure framework which takes into account projections for the years 2015 to 2017 using 2013 budget as the base year.

He said the 2015 budget will provide the completion of all ongoing projects put in place help job creation and poverty reduction, as well as boost physical and human infrastructure.

According to Governor Orji, fiscal control policy measures would be put in place in order to achieve full implementation of the 2015 Appropriation Bill when it finally becomes law.

The adoption of Public Private Partnership initiative, the governor said, would build strong stakeholder support which will create wealth, empower the the private sector and generally bring about improvement in the welfare of Abians.

Responding, the Speaker of the House of Assembly, Ude Oko Chukwu urged the state government to endeavour to consolidate and improve on the gains so far achieved with a view to returning the state to the path of sustainable economic growth and development through structural and institutional reforms.

The Speaker advised that job creation programmes be further formulated and implemented to make the domestic economy to become more productive.