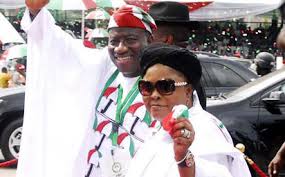 Mr. Iworiso-Markson also said the rally could be illegal as INEC had not authorised campaigns.

The plan by a group, which calls itself ‘The New Dawn Development,’ to organise a rally in support of President Goodluck Jonathan for 2015 was enmeshed in controversy on Saturday as the Bayelsa State government initially dissociated itself from the rally, then backtracked.

The rally was to be held in Bayelsa to drum up support for President Goodluck Jonathan’s re-election bid in 2015.

Mr. Jonathan is from Bayelsa and was a governor of the state.

In what appeared a shock to observers, the Governor Seriake Dickson administration in Bayelsa dissociated itself from the rally.

A statement from Daniel Iworiso-Markson, Chief Press Secretary to Mr. Dickson, stated that the proposed rally has been hijacked by a faction within the organisers.

Mr. Iworiso-Markson also said the rally could be illegal as INEC had not authorised campaigns.

“We also must remind ourselves that, the Independent National Electoral Commission, INEC and even the Peoples’ Democratic Party, PDP have not released their time tables and so, no group or individual is permitted to embark on any political rallies, and such will be seen as a ploy by the individual to use the name of the President to pursue his or her own selfish ambitions,” he said.

However, two hours after issuing the statement, Mr. Dickson’s media managers made frantic efforts to withdraw the statement and appealed to journalists to step it down.

No reason was given for the withdrawal or whether the rally would be allowed to proceed or would even have the state government’s backing.

“It has come to the knowledge of the Bayelsa State Government that, a group, which calls itself, ‘The New Dawn Development’ has concluded plans to hold a rally in Yenagoa, the Bayelsa State Capital, purportedly to call on President Goodluck Jonathan to declare his intention to run for next year’s presidential election.

“While Government is not against such rallies, but going by Police intelligence report that a splinter group of the same New Dawn Initiative Development has mobilized to disrupt the proposed rally, it became expedient for Government to back the action of the Police to stop the rally in the light of the current security situation in the country.

“If the rally was allowed to go on, some unscrupulous persons could take advantage of it to unleash mayhem in the State to give the impression that, there is crisis in Mr. President’s home State in a bid to spite him.

“We also must remind ourselves that, the Independent National Electoral Commission, INEC and even the Peoples’ Democratic Party, PDP have not released their time tables and so, no group or individual is permitted to embark on any political rallies, and such will be seen as a ploy by the individual to use the name of the President to pursue his or her own selfish ambitions.

“For the avoidance of any doubts, the Governor, who is the leader of the party in the State is well positioned to lead such rallies and naturally should emanate from him and not any other individual or group.

“Based on intelligence report, the planned rally has been infiltrated by miscreants, political jobbers and cultists, who are bent on using the rally to cause trouble and breach the existing peace in the State. It has also come to the knowledge of the Government that, no notable politician is billed to attend the rally, except for some misguided youths and miscreants.

“The Government also wishes to state that, the scheduled venue for the rally, Central Epie Secondary School, Opolo, is not an ideal setting for a rally of that magnitude, barring the fact that, students of the school are presently writing their Senior Secondary School Examinations, even as no proper requisition and approval was granted for the use of the said school premises by the relevant authority of Government.
Furthermore, the Bayelsa State Governor, Hon. Henry Seriake Dickson has never wavered in his support and solidarity for President Jonathan.

“The Governor has on several occasions, both individually and as part of various interest groups within and outside the Peoples’ Democratic Party, PDP at State and National levels, spoke passionately of the need for Nigerians to support the Transformation agenda of the President and also to rally round him for a second term in office.

It must be noted that, under the prevailing political circumstances, any group or sectional rallies, without the participation of the Governor and other major stakeholders of the PDP in the State, will end up sending a rather dangerous signal to the rest of the Country, as it may even portray the home base of the President as a house divided against its self.

In view of the foregoing, the Government wishes to call on all party faithful and the ever supportive Bayelsa public to disassociate themselves from the proposed rally, as it does not have the approval and support of the Government and may send a negative message to the rest of the country, ahead of the 2015 presidential election.

“This is not the time for the PDP and Bayelsans to be divided. We should rather pull our resources and energies together and rally the needed support for our Leader and President of the Federal Republic of Nigeria.”